Hi guy’s, i am after some information from those with far more knowledge and brains than myself

I have just come into possession of a 1988 Le Mans mk V. Well an almost complete one. sadly no engine and gearbox. However, it does have an Agostini faring and has a black, white and red colour scheme. What can anyone tell me about said bike. Is it worth restoring, I would hate to loose another Guzzi to the scap heap. I think every thing else is in the boxes that i will need. Frame number is VV15705.

As in - you have no gearbox or engine at all … or they will be in the boxes?

Did you get a log book with the bike and a registration number also will you get to keep that number if put another engine and gearbox in is it going to worth it you need to also make sure your frame is OK also hope it all works out Derek.

There is no engine and gearbox at all. I would need to find replacements.
The frame has been prepped for new paint and looks to be straight. Remainder of bodywork is in good condition apart from the paint finish. Doesn’t look like it has been down the road. And there is no V5, so I will have to re-register it i guess

I don’t think I have seen a black, white & red Mk 5, so I did a Google search. Looks very nice. Is yours like this ? 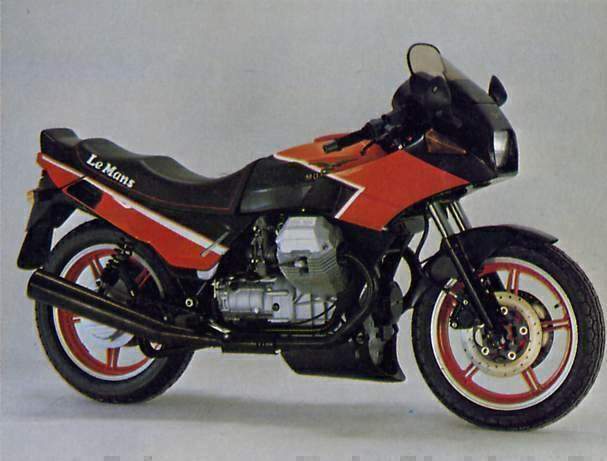 Yes thats the one Richard. Except it has a full race faring with Agostini logo on but with the same paint scheme

Have seen an 1100 Cali engine and gearbox on fleabay recently, that would make an interesting combination.

Now have a gear box in my possession! Not Lemans though. Think its 1100 cali. Now on the look out for an engine.

They are going for anywhere between 3 and 4 grand in decent working order. If you decide against rebuild I may be interested in buying the whole rolling chassis and boxes with fairing. I have a mk v I am restoring at moment and a mk iv in boxes ready for painters.

I’m not sure but I think ther Cali evo had big valves like the lemon would just need the cams to sport it up a bit.

There is no engine and gearbox at all. I would need to find replacements.
The frame has been prepped for new paint and looks to be straight. Remainder of bodywork is in good condition apart from the paint finish. Doesn’t look like it has been down the road. And there is no V5, so I will have to re-register it i guess

I am just going thro the whole thorny issue of trying to get my Monza registered (still not managed it yet but hopefully getting there) The engine number was never an issue but the VIN number, even though its clearly visible and was MOTd using it, was rejected by DVLA as not recorded. My biggest tip is to not mention any reg numbers even if you have one in the boxes because thats what they focussed on in my case so they allocated a new 17 digit VIN to match the reg . The application process is straightforward but their interpretation isn`t so they are quite rigid on everything being age appropriate and as near original as possible.
Just to clarify my bike arrived in boxes with all numbers visible and reg plate showing as a blue Moto Guzzi on the DVLA website but no V5c. Both my engine and frame had PE prefix numbers appropriate for a Monza
These are the requirements as stipulated in my letter from the DVLA
New VIN number to be stamped onto the frame by a franchised dealer or local garage and for them to then sign and company stamp the declaration
completed V55/5 application
registration fee (£55)
current MOT certificate
two forms of identification
inspection report from appropriate vehicle owner club dating each major part
I am now in to my fourth month of this application
The bike has been inspected by DVLA and was declared to be all original and not to have been tampered with
You have to hope that the frame number is recorded otherwise all the above awaits you

Hi guys
Bit of an update… just got a 1000cc motor in my possession! it had a big end shell spinning and was looked at by the guy who had the original bike before the very nice man i bought the motor from. I need to find out why the big end shell failed, how far do i need to strip the motor to check/clean oilways. There were no metal pieces in the oil apparently when first checked and the shell had only just started to spin on the crank. otherwise it seems to be in good nick. Has Lucas Rita ignition and a spanish alternator. Inlet ports have been taken out to 36mm and i have a pair of 40mm pumpers to fit. Also has a nice set of gears in the timing chest

. Is it worth changing the cam for something a little hotter or is this really necessary
Other thing is what colour shall i repaint it. black,red and white or just red?
Thanks for any advice

Wild guess, could be the sludge trap in the crank got clogged up, so big ends starved of oil. Can happen over time unfortunately.

Thanks Mike. Where is said sludge trap.?

It is in the web of the crank, in line with the big end journal, which means taking the crank out of the engine.

My vote would be for red paint only!

I was also thinking red. I think it looks more “le man’s”

It is in the web of the crank, in line with the big end journal, which means taking the crank out of the engine.