How do I adjust my timing.

I’ve owned my Airone for a couple of years now. I don’t do a lot of miles each year but figured it was about time I checked the timing. My timing light ( backed up by the trusty cigarette paper ) tells me that my timing is definitely advanced. That was a surprise as it usually starts easily. The good news is that the auto advance is working, as I can see the timing mark move when I rev the engine. The bad news is that I can’t see how to adjust the timing. #there is one big screw under the points but this (looks like) it is for adjusting the points gap. How to I retard the ignition ?? 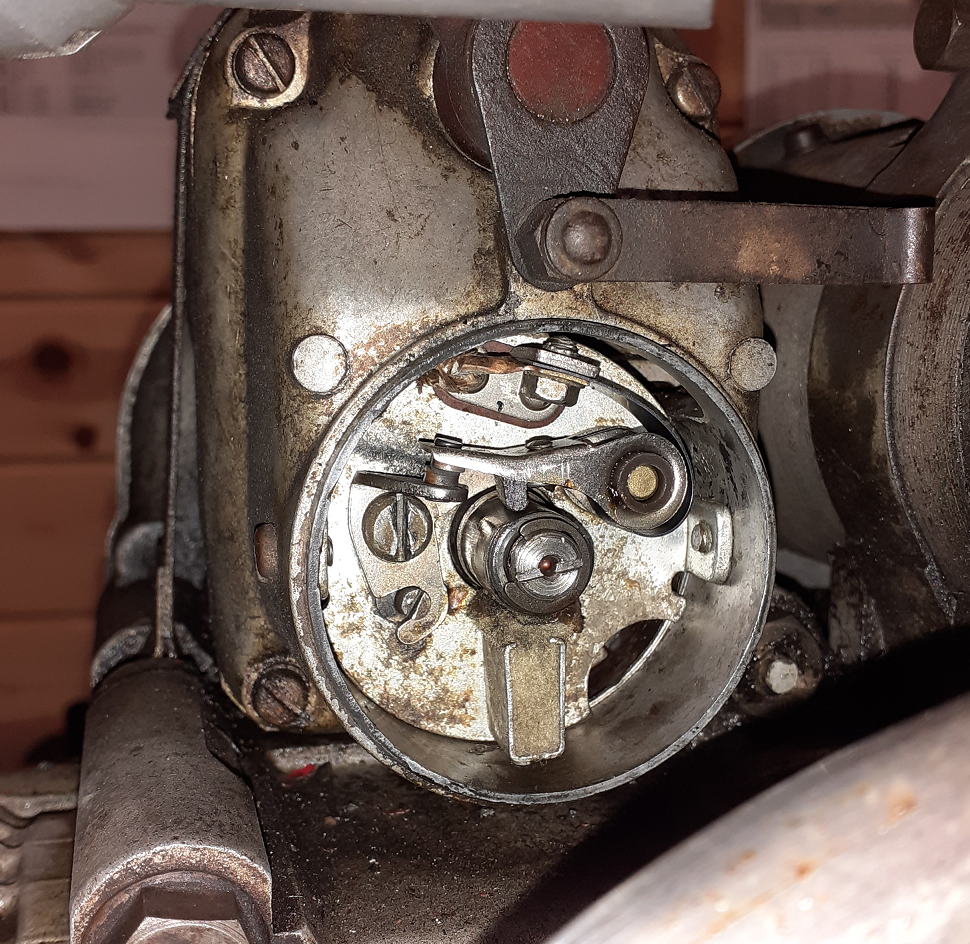 I’ve got an Airone with a mag just like that but I havn’t had to adjust the timing so I can’t advise. Would suggest you join the Google Moto Guzzi singles group. Lots of learned help available there.

I dare to suggest that it may be done simply by altering the points gap. The small screw at bottom left looks to me like it might be eccentric, if so, you can loosen the larger one above and turn? If however the bike runs fine then retarding it might be the wrong thing to do?

Mike: It hadn’t occurred to me that the lower screw could be eccentric, although I did wonder about the way that it sits in that slot. I’ll investigate this tonight.

Phil: thanks for the recommendation about the Guzzi Singles Google group. I am already a member but I couldn’t see anything there about timing these brutes. However, I have been able to get a nice diagram of the internals of the MCR4 mag from Shawn ( user SED Sci ). It looks like I have a little adjustment via the points gap, but if that is not enough then I’ll need to remove the mag and re-align the timing gear.

I will report back.

Mike: It hadn’t occurred to me that the lower screw could be eccentric, although I did wonder about the way that it sits in that slot. I’ll investigate this tonight.

I would have assumed that will only adjust the points gap. The central pillar where the moving part of the poins set runs on is presumably a cam so that the points open and shut as it rotates. It has a slotted collar to the end with a clip to lock it. Is this the adjestment for the timing? If it is it would advance or retard the timing as it were altered and rotated left or right. I wold be surprised if moving the fixed contact of the points set does anyting else than adjust the points gap. You need an expert!

Hi Chris,
Yes, I need an expert. That’s why I turned to you.

From what I have learned, there is a limited amount of adjustment available via the points gap, but beyond this it is necessary to realign the gears that drive the mag. There are 36 teeth on the mag gear, so each tooth equates to 10 degrees rotation.
You are correct about the slot in the end of the shaft, but I am led to understand that I need to remove the mag in order to make this adjustment.

I have no clue on this model. I can advise that on my BSA A10 the whole magneto has to be set just right and then pulled down onto a taper. A PITA of a job and with no fine adjustment allowed for any misalignment introduced as you are pulling it down. Maybe something like that? You mentioned that it appears to be too far advanced. If it is not kicking back when you are trying to start it, and not pinking on the road I’d be inclined to leave it as is.

If it is not kicking back when you are trying to start it, and not pinking on the road I’d be inclined to leave it as is.

Good point Butch. I decided to look at the timing because I thought the bike should have a little more puff, but maybe I’m expecting too much from a ‘50s 250 single. I guess I could put it on a dyno, but that seems a bit extreme.

According to the factory manual for the 1953 models, the ‘Tourismo’ model is supposed to be rated at 9.5 cv. and the Sport model at 12 cv at 5200 rpm. The Sport is supposed to be capable of ‘circa’ 117 kph. Main differences are the Sport has alloy rims, forward mounted brake lever (different footpeg position), swept back handlebars, an SS25 carburetor, thicker valve springs, a different piston (7:1 compression ratio) and a different cam. Inevitably, over the years a lot of current examples appear to be a bit ‘mix’ and match.

I have been investigating why my Sport only does 55 mph flat out and seems a bit ‘gutless’ up hills. So far I’ve managed to confirm that it has all the correct Sport components and just have the valve timing to check (no timing dots on the cam gear!). Not really found anything amiss other than a badly seated inlet manifold gasket and a missing inlet manifold gasket. Will be reassembling in March with crossed fingers!

Perhaps a comparison with my old Tiger Cub would help, although only 200cc it was rated at 14 HP at 6500 rpm but had a top speed of only 97KpH. (factory figures) Thus yours does seem a tad down on power but finding where the loss is may be a case of working methodically thro` everything including brakes and tyre pressures for instance.

Thanks again for your replies. I had a pretty busy weekend so I didn’t get a chance to try anything suggested so far. Your comment about tyre pressures is a good pont. On a bike of this size soft tyres will definitely make a difference. I’m also suspicious of the carb as I think it is worn, but I have been unable to find a replacement slide.

I remember a Top Gear programme about how much hp is lost due to normal engine wear. I.e., using it!

I finally got some time to look at the timing yesterday. Mike’s observation regarding the small screw being eccentric was spot on, so thanks for that. A free beer when I next see you.
Armed with this information I was able to set the timing to the number in the book ( 20mm on the flywheel edge BTDC ).
However, having done that, the bike is now harder to start and won’t idle. Perhaps I should have left it alone.

It may be a long shot, but I’m now wondering whether the timing mark on the flywheel is accurate. I’m going to check that next, and will report back.

I’m happy to report that the timing mark on my flywheel is correct. I’m also happy to say that I believe I have the timing about right now. I had previously introduced a problem as I adjusted the points. As I was tightening the big screw that holds the fixed half of the points I noticed that it moved slightly. Obviously even the smallest amount of movement here equates to a few degrees difference in the final setting. So to avoid this, when I re-adjusted using the eccentric screw, I tightened the large screw until it was almost tight. Leaving just enough slack so that the adjuster screw could do its thing without stress. This left just a small turn on the large screw once I had it in the correct position. ( I hope that makes sense ).

So… now I just need to wait for a day when it isn’t raining so that I can take it out for a spin and see if it is any more sprightly. I am pretty sure that this is a sport model as it has all of the exterior sport parts, although I haven’t checked the piston and cam. I’m looking forward to the full 12 hp.

Oh yes been there with the Tonti big-block distributor / “timing unit”, nip up the bolts at the base to finally lock it and it tilts the dizzy slightly and throws the timing off

Incidentally I’ve just acquired a BSA Bantam, very similar arrangement, a very small amount of rotational adjustement of the magneto / generator unit is provided, but mostly it’s determined by the points gap, which is embossed to the side as a reminder “015 INCH”

I was interested to see this topic as I had the same problem with my Falcone Sport last year. It was running very well, but the flywheel arrow was indicating that the timing was way too advanced. Not being a student of magnetos I assumed I would just move the points plate to correct the timing. As you also found, this is not possible! The magneto timing is fixed apart from slight adjustment by adjusting the points gap. I did try moving the timing gear round one tooth, but this has a massive effect. It’s not 10 degrees (which is also what I thought it would be), but 20 degrees as the crank gear has only 18 teeth!
Based on feedback from the Singles forum I just put it back together and enjoyed riding it. Then came the fateful day when there was a crack, a bang and the 8kg flywheel came off and bounced down the road alongside me at 50 mph! What I believe happened was the key which locates the flywheel on the crank was gradually giving way so that the arrow on the flywheel was giving a false reading of the timing. Eventually the keyway broke completely and allowed the flywheel to loosen off.
After repairing and rechroming the flywheel’s as good as new - and it’s reading the correct level of advance for a Falcone Sport of 35mm retarded and 105mm advanced.
Might be worth taking your flywheel off and checking the condition of the key?

Wow! Now we know why the flywheel centers are painted red. It’s so that you can find the bugger when it’s hiding in the shrubbery. I bet that was an “interesting” experience, and certainly useful information to share with he group.

Apologies for the slow reply, but i have just spent two of the last three days in airports and airplanes. But that’s a whole different story.

Slow running up hills is unfortunately a feature of the automatic advance magnetos. My 1956 Turismo was converted to a manual advance/retard by a ‘boy racer’ many years ago and on a good day will do 59mph on the flat and pull up hills quite well. As other correspondents have stated, if it’s not broken, don’t fix it.