UPDATE – I have installed a new standard Clutch cable, hooked it into the gearbox clutch lever arm, located the outer cable into the bracket on the gearbox and connected it to the Clutch lever.

ISSUE - No matter how I adjust it at the Clutch Lever end, I have NO tension in the cable …

I know that there is adjustment at the gearbox lever end but didn’t want to play with that unless absolutely necessary. If I do, how much movement is there here ?

note - The lack of tension is the same as it was with the original cable (as below) that only worked correctly if the outer cable was pulled out of the gearbox bracket and located against the front of it !

NO ADVICE ???
Grateful for any advice on this please ?

My newly acquired 2007 Breva 750 had Bar Risers on it and while familiarising myself this weekend with the bike I noticed that the Clutch cable at the Gearbox end had come out its location and was sitting against the mounting. The clutch lever felt OK. However when I relocated the cable end where it should have been there was no cable tension at the lever end.
When put back where it should have been and turned the steering to extreme right it popped out again.
I can only assume that the risers made the cable too tight. The Choke lever also only moved a small amount.

So, I have removed the risers as I don’t need them and I now need to put the cable back into its gearbox mount and then adjust at the lever.

NOW DONE ---- Q - How do I get to where the cable is connected to the gearbox mounting ? Do I need to remove any body parts as I can’t easily see that end of the cable ?

p.s. Any guidance on the route the cable from the lever to the gearbox should take ?
I can’t see anything in the manuals

Hi, I suggest that you repost this topic in the ‘Technical’ section of the Forum, in the ‘Small Block’ zone.

I don’t know the answer to your questions, but I’m sure someone on here will do.

Hi, sounds like the risers are the problem, as a thought you could look at getting a longer cable, a Nevada one may be suitable as they had higher bars, I can’t be sure of the G/Box fitting but I bet they are the same. Rerouting could be a problem as the clutch cable still needs to go around the right hand side of the engine.

I have changed a Brava 750 cable on a dealer’s forecourt in Germany with the standard tool kit, so it won’t too involved.
Form the crank axis, at the rear of the gearbox, there is a slave lever that pokes up just above the gearbox for cable connection.
Has you cable been custom made with a bespoke sheath length.

I’m going back to standard cable and no Bar Riser.

My real question is - How do I get to the Gearbox Clutch lever to connect the new cable and also “possibly” adjust if needed.

What do I need to remove to get to it ?

If you have fitted a new Moto Guzzi cable for your model and can get no tension to operate the clutch, first question would be (since the previous owner made some mods) have you got a standard handlebar lever? If the handlebar lever is OK the problem must be at the gearbox end.
There is a short adjuster with locknut in the clutch release arm at the back of the gearbox, but this is only for setting up the lever angle to ensure a smooth cable pull, it isn’t long enough to take up freeplay in the cable. Just inside the rear of the gearbox cover is a thrust bearing which transmits pressure from the release arm to the clutch push rod. This is not lubricated and can wear and the needle rollers fall out. Have a look at a parts diagram on the internet.
Whether a failed bearing would create as much cable freeplay as you are experiencing I cannot say, but the bearing assembly can be pulled out from underneath the bike if needs be.
If you’re getting nowhere an old dodge would be to fit an additional split cable adjuster in the cable stop on the gearbox and take up the cable freeplay with that, leaving yourself some adjustment at the handlebar end. But be warned, a temporary bodge will not cure a damaged clutch push rod or pressure plate. Sorry.

I appreciate the help and comments

Just been out and familiarised myself with mine and on Fowlers exploded parts diagrams.
The only cable adjustment is at the handlebar.
My cable site nicely and securely corroded into the gearbox casting.

Assuming your master clutch lever and perch are standard, I can only assume your slave lever is bent or their is a mal-adjustment of mis-assembled close to the clutch.

You could use a clutch adjust screw in the gearbox casting to take out the slack, thus negating the problem.

Thanks for the info and you are correct that there does not seem to be a secondary adjuster as standard.

That said, I went to see a friends bike yesterday that is exactly the same Year as mine and he has an adjuster so, as mine has had a few owners I wasn’t sure if mine should have one.

My cable is relatively new.

See pic attached of his adjuster. 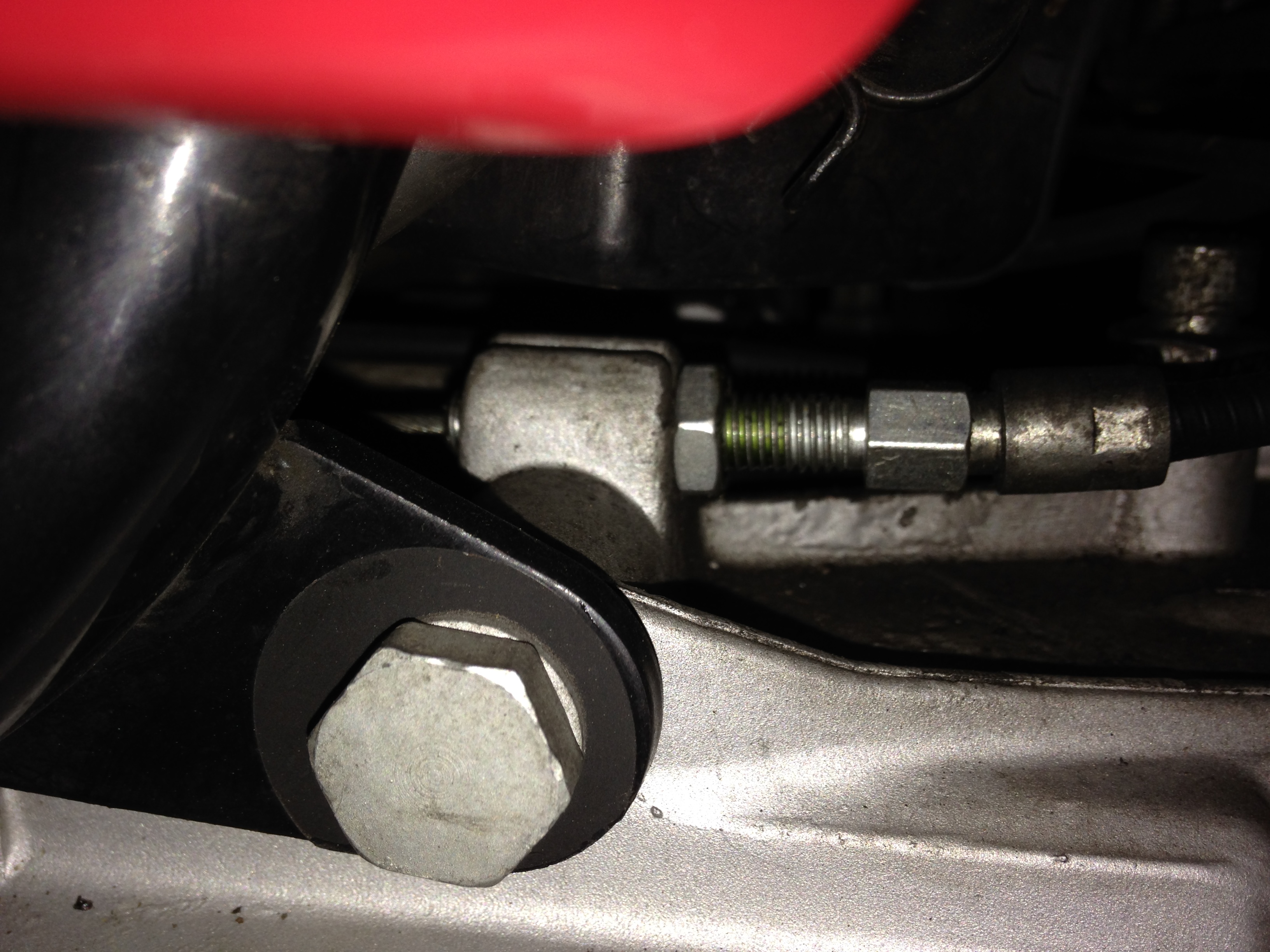