A couple of oil drips from bellhousing

V1000 G5. New to me. As per the title I’ve noticed a drip or two from the slot at the bottom of the bellhousing after a run. I suspect this is from a worn rear crank seal.
Is this likely to contaminate the clutch?
It doesn’t look too big a job to drop the box or even the whole lump to pick out the old seal and press in a new one. On these old air cooled engines, do the rear main seals tend to drip for years, or suddenly give up big time?

A drip from the bell housing is usually a sign of a failing main seal, but could also be coming from the engine breather return pipe. In most cases it will run down the case rather than onto the clutch, but is unlikely to heal itself and a bigger leak can contaminate the clutch. Have a sniff of the oil to see if it is engine or gearbox oil (Hypoid gearbox oil smells foul)
Getting to it is not a 5 minute job. With a Guzzi you take the bike off the engine rather than the engine out of the bike. It’s easier doing it that way.
It can be done over a couple of days, but I prefer to take my time and clean everything up whilst its apart so took a few weeks when I did mine a few years ago.
I suspect I may have to dive in again soon as I have a fair drip after any fast riding.
This is what it looks like with the clutch off. The engine vent return pipe is at the bottom. 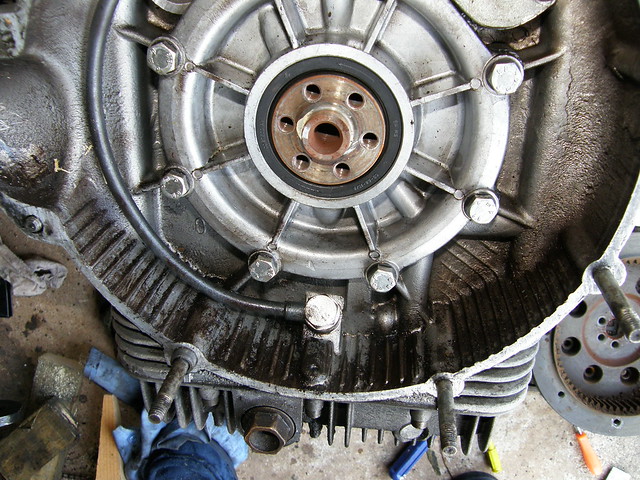 Thanks Don-Spada for your time and photo. Looks and smells like engine oil. I’ll keep a watch on the consumption and hopefully get to enjoy her over the summer with the intention of a strip down come winter.

The other options would be that
the drain tube leaks - but I didn’t remove it,
the rear main bearing flange gasket leaks - but it’s new and it was coated with Hylomar both sides,
or the two lower screws leak, but they too were Hylomar coated before installation.

As it doesn’t seem to leak when not running (though it’s difficult to tell, of course) my guess is that the seal is the problem.

Any other ideas?
And,
How do I get it out, without removing the main bearing?

Presumably, if I remove the main, I have to at least remove the camchain tensioner?

Hi Simon
I have never been into my engine any deeper than as shown in the photo above. I did replace the seal. It can be prised out without removing the main bearing with care. Wind a couple of self tappers into the face and pull/lever it out with them. A tiny smear of silicon is recommended on the outside of the new seal.
pm sent.

The metal bung filling the machine hole for the camshaft is also well known for leaking. Mine has been leaking for a while and I live with it, until I have to go into the bell housing again. It doesnt affect my clutch.

Hoping to get the engine out tomorrow evening.

I was not aware of the camshaft “bung” leak issue, I’ll check that, so thanks for the heads-up.

The metal bung filling the machine hole for the camshaft is also well known for leaking. Mine has been leaking for a while and I live with it, until I have to go into the bell housing again. It doesnt affect my clutch.

What a great access to knowledge this forum is. Presumably a de-grease, a roughen up and a smear of JB Weld over the cam blanking plug is the way to go here?

Correct, thorough degrease and a bead of JB around the blank.

Having literally just put it together, it’ll be less of a pain than the first time, as none of the fixings will be corroded or jammed, and I know how to do it.

The reality was that I’d forgotten the exhaust in the list above, and my two hour estimate for getting it stripped, & the engine onto the workmate with the box & flywheel off was nearer three & a half hours, getting the seal out taking a good half hour of that, but it was a good session Monday night.

The seal was clearly leaking, I must have damaged it when I put the main back in. Hopefully didn’t damage anything else!

There doesn’t seem to be a leak from the cam bearing bung, and everything else is in good order. I have not taken the alternator off, so need to make a cradle to sit the engine nose-down whilst I insert the seal, and fit the clutch, the plan for today is to do that, put the engine & box back together & phone a friend to help to put the frame back on. With a bit of luck, it’ll be on its wheels this evening, and running, if not, there won’t be much left to do tomorrow.

Engine & gearbox back in frame, rear suspension & foot pegs fitted. Took rather longer than taking it to bits - about 4 hours.

And not forgetting to fit the new led headlight bulb.

Running by lunchtime, I hope.

Failed yesterday, but back together this evening. Starts, runs, idles.

I’ve got a new noise. A gentle grinding, seemingly at the front of the engine when I pull the clutch in. Thoughts?

My clutch rattles when the clutch is released rather than when pulled in.
I would take the plastic alternator cover off and see what happens when you pull the clutch in with the engine running. I know mine seems to have a surprising large end float on the crank when pulled in and out.

That is where my mind was heading. I shall check the crank end float tomorrow.

My alternator cover is ally.

And it has marks on the inside, which I assumed were the results of the previous owner not tightening the alternator bolt sufficiently…

A couple of suggestions I had seen were to fill the back of the seal, and the groove between the two lips, with good quality silicone grease, and to push the seal a little further into the block, so the seal runs on an unworn part of the crankshaft.

I can see no good reason for filling the back of the seal with grease, but it cost about fifty pence, so I did.

I can imagine that in the typical home workshop, any oil that was applied to the seal lips may have seeped away by the time the engine is fired up and oil pressure & flow established, so the seal lips may be worn / damaged during the critical first few seconds of the crank turning, so I guess a bit of grease in the seal groove is good insurance to protect the seal.

I’m surprised that the seal would wear the crank (always assuming there’s no wear debris embedded in the seal itself, not likely I feel) but it was a matter of two minutes to machine my home made seal-putter-inner to push the seal 2mm further into the crankcase. Again, negligible cost.

Upshot is that after a brief test run today, theres no oil leak, so one (or more) of the above made a difference.

Whilst I was at it, I put new needles and jets in the carbs, and replaced one of the float pivot rods, which was surprisingly worn. The other one wasn’t at all. No, I don’t know either.

I changed the oil, but didn’t change the filter.

Tomorrow is the Kent Branch Airfield run, I expect to do about 120 miles all told. Fingers crossed, no oil leaks, and it’ll run ok. Will report in due course.
Simon

And overfuelling apparently sorted too

Ed’s final tweaks to get it right. Weekend job, I hope.

Just been through the same problem of a leaking Bell Housing on my newly rebuilt MK2 Le mans.

My bike was built up by me over a 3 year period from a pile of totally dismantled rusty parts and the most difficult bike I have ever restored as I did not strip it and there were missing parts!
I had only covered 75 miles so it was a right pain to strip it all down again, but once you get stuck in its not too bad.
This time I bought the correct tool to pull the rear main seal in to the correct depth and so far so good.
No doubt there will be more teething probs but these will be rewarded for more nice riding miles just like I remember when I had my first Le Mans in 1980.
All the best from Jon.

Thanks for your input Simon. Interesting that the seal can be pushed deeper into recess to avoid previous wear marks on the crankshaft surface. I’ll check mine carefully when I eventually get around to it.
Inspite of my concerns about the drips she recently did nearly 2000 miles over 4 days with two days both exceeding 550 miles from the NE of Scotland down to Brighton and back mostly on motorways. Total consumption was less than a pint so I didn’t bother with a top up for that trip but carried the necessary in case it was needed. I’m sure that without the leak the consumption would’ve been negligible.

Sorry, promised to update the thread, and didn’t.

Happy to report, no oil leak, running pretty well, but I felt it was a wee bit weak, so I lifted the needles to the bottom notch. Not had a chance to give it a decent run since, but it’s starting & idling sweetly, and I think it’s pretty much right now.

The key issue was timing, I had lots of issues getting it right. I am fairly convinced that my timing light is not correct, it has an adjustment that allows the flash to be offset from the spark, and I believe this does not work correctly. I need to check it, though that will be a challenge!

That said, I set the Rita when I first installed it some thirty years ago, and until earlier this year, it never needed to be touched. If it’ll do me another thirty years, I’ll probably not be worrying about it!

Got some persistent drips from under Blue, and this after a clutch and oil seal change only a year ago. I’d assumed it was gearbox oil but it is still up to the level plug on that. Best that I have a sniff of the leakage and then consider my options.

What is the special tool for fitting the rear crank seal to the ‘correct’ depth?