Last one (same type), has been in since Jan 2016, and was getting a bit ‘tired’.
Was regularly struggling to turn the Engine over reliably from cold.
If I just hit the Button and let it do it’s ‘Auto-Start’ thing, it would usually just do half-a-spin, then stop, with the ‘Blank Dash’ scenario.
Holding the Start Button down bypasses the sequence, and it would always start, albeit with a slight pause as it struggled past compression.

Found some damage on the old one, where the Welds on the Bracket had been rubbing.
Not far off breaking through maybe. 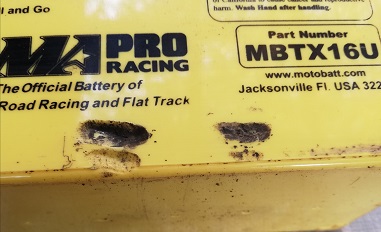 Might be worth checking if you have the early Small Tank model.


I removed the original Foam Rubber Pad it sits on, and used some slightly thinner Adhesive-backed Foam, adding a section where those Welds are.
Also levered down on the Retainer while tightening the Screws, to make sure it was as secure as possible.

Hi Doc, My Stelvio is the last of the small tank version first registered March 2011. It is still running on the original battery but this is now past its best. I want to get a new battery but am not sure if just replacing it with the original manufacture is the best way to go. How do you find the Motobatt MBTX16U? Is is physically larger than the original? Is that why you used thinner foam or was that additional foam?

Anyone else have a suggestion for a new battery?

Hi Chris, Why would you want to move away from the original battery if it gave you nigh on 10 years of service? I have used a number of Moto Batt batteries and have found them to have a relatively long life. (Nowhere near ten years though). I have found that battery life is very much related to how they are looked after and maintained. I have found that the Optimate battery tenders work well and I normally get more that 6 years out of a battery. I recall that the original battery in my Quota 1100 lasted ten years plus. I also have a small tank Stelvio that is hibernating in Italy, so far the battery has lasted four years and it is constantly on a tender. I hope to wake it up in September so I will see if it is still good and also look at the casing for signs of rubbing on the welds of the box.

I too use an Optimate, but these days it seems to be attached all the time. I agree with your comments about it’s longevity and I will find out prices to replace the original one first.