So here’s a thing. Blue, my T3, suffers a slight hesitation – just for a moment, at the lower end of the rev range whenever I’m accelerating away. Occurs at about 25 mph in third (I have no rev counter). I’d guess it’s always done it. Ridden solo it’s not so discernible and not a problem – hence I’ve never investigated. Two up it is much more of an issue. And as I’m thinking about moving my Rexxer along it will have to cover more loaded trips if Covid and lockdowns ever desist. So I should probably go looking for it …

The bike is running on the std 30mm carbs, albeit with pod filters. I’m unsure of the jetting at the moment. Ignition is via a Newtronic set up, of unknown age. Fuel system has all been cleaned on various occasions, coils, leads, caps and plugs were replaced in the last year or so. The bike starts on the button, ticks over like an Italian watch, pulls beautifully throughout the rev range aside from this one glitch.

A very similar set up to my Spada, Original square slide carbs, Original air filter replaced with K&N type filters years ago when I bought the bike and Newtronic ignition fitted.
I have never rejetted mine as I have never really felt the need. Some do recommend a 10% increase in main jet size.
I would have a look at the accelerator pump inside the main jet tube. It is the bit in the middle in the photo below. I found mine to be quite clogged up. There are a few holes in it that I poked various bits of wire into and cleaned it with carb cleaner. There is a small pea type thing inside it that should rattle around. I believe you can unscrew one end, but mine was tight and likely to cause damage to it gripping it whilst trying to open it up. 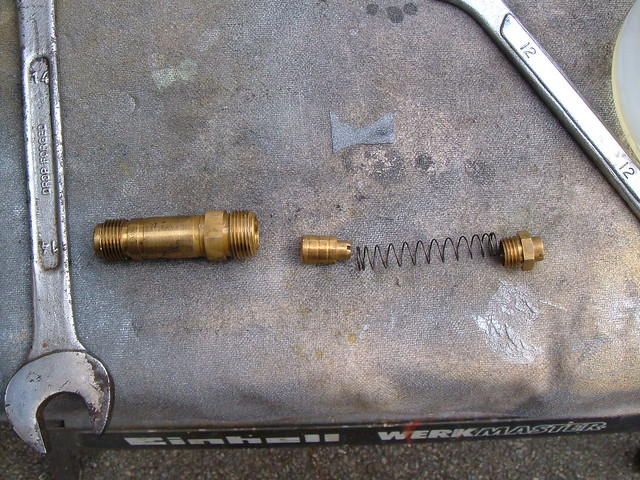 There is a small pea type thing inside it that should rattle around.

That thar is a ball valve.

I believe you can unscrew one end, but mine was tight and likely to cause damage to it gripping it whilst trying to open it up.

I thought I’d previously pulled all the jets on my carbs but don’t recollect ever seeing that kind of set up in there. The bike is still on the table in the garage so maybe I’ll pull them down at the weekend and have a good look around. It’s not like I’m going anywhere.

As an aside - the Newtronics box seems to run faultlessly, and as I say; apart from this glitch the bike runs real peachy. But the luddite inside of me says I want to switch back to a system I can fix at the roadside. To that end I have recently acquired a points plate with points and condenser to go back in. Though I’m still in two minds.

You can get the jet assembly out without removing the carbs, just drop the float bowls off and unscrew it. A nice easy job to do.
I fitted a piranha system when I bought the bike 30 odd years ago coz it’s what everyone did then. It failed around 5 years ago and I just replaced it with the Newtronics equivalent. It works just fine, a very simple system where a bit of black plastic cuts out a light beam.

I fitted a Lucas Rita to my LeMans about 30 years ago. I haven’t done millions of miles but she gets out every few weeks/months, so I’ll be the first to say that it hasn’t been stressed much, but I haven’t adjusted it at all since fitting it.

There is no way I’d go back to points if I had electronics available.

Well I went through the carbs this weekend. All absolutely clean as a whistle. I pulled down that central main jet stack this time which was a voyage of discovery - but no dirt at all. My tiny balls appear to be made out of some kind of nylon/plastic. Small but perfectly formed for now, but at what level of ethanol might I need to fear for their integrity?

And what can I check next for the underlying issue?

Jet details are as follows;

Pics are on FB btw - including my having to helicoil one of the banjo retainers.

My tiny balls appear to be made out of some kind of nylon/plastic.

I have a K&N oval filter on my Spada and increased the main jets as it felt a bit breathless at high rpm.
Yours doesn’t sound like a main jet problem, as they only come into play at fairly wide open throttle.
More like a needle or atomiser issue if it’s at part throttle.

When I set my PHBL up on my Ducati from scratch, I first got it idling with a decent mixture by changing the pilot jet. Then got it to accept some throttle by swapping the atomiser, the fiddled with the needle to get it most of the way and finally main jet.
Although with only 10hp or so it’s fairly easy to hold it on full throttle to see the effect of the main jet changes.
Luckily you can buy knock-off needles and main jets or it would be considerably more expensive. And there’s only one carburettor.
Needle profiles are easily found on line so you can work out which gives you richer/leaner at different throttle opening.

Plenty of info on carb tuning etc in this link https://www.thepembleton.org.uk/techpages/dellorto.shtml
But it does relate more to the round slide PHB carbs rather than the square VHB’s, it might help a bit

Some people reckon to disable the accelerator pumps and notice no change in performance, but improved fuel consumption.
I think there’s an explanation of how they work in one of the on-line Dellorto tuning guides.

The brass bit goes up and down with the needle as you open and close the throttle. My guess is that it is pushed down into the fuel in the float bowl when the throttle is closed and therefore brings a quantity of fuel back up with it when you open the throttles.

Exactly right, and it’s not a lot. Just a bit to compensate for the slides being lifted quickly.

The brass bit goes up and down with the needle as you open and close the throttle. My guess is that it is pushed down into the fuel in the float bowl when the throttle is closed and therefore brings a quantity of fuel back up with it when you open the throttles.

Hadn’t even pictured that the needle runs into the stack there. Suddenly all becomes clear. Thanks.

But it leaves me with an unfixed problem.

Could it be down to the Newtronics? What controls the advance on that, is it electronic or still running the bob weights?

Newtronics does leave the original advance retard in place. It is just a light that is cut off that activates the system.
My guess would be down to carbs rather than ignition, although checking the timing might be worthwhile.

I’d be tempted to try moving the needle clip position both up and down and see if the hesitation moves or improves, costs nothing and easy enough to try before I went looking for other problems

It’s just that everywhere else the bike runs so well. Could try raising the needle and see I suppose. The bike is on SORN for the duration now so there won’t be any testing until Spring.