Got some nice upgraded heavy duty fork springs from Gutsibits. Taken forks apart but can’t work out how to get the old springs off - almost looks like a sealed damper spring unit.
Any clues??

Should be a circlip and collar at the spring end,just pull the spring toward the damper and have a look …

Is there not a hole in the damper rod extension, that you put a screwdriver through, wind the screwdriver around forcing the spring Down, take off the circlip then unwind spring until it comes off?

Is there not a hole in the damper rod extension, that you put a screwdriver through, wind the screwdriver around forcing the spring Down, take off the circlip then unwind spring until it comes off?

Yep, that’s the way I do it on my bikes and I assume the Le Mans 5 is basically the same but I’m not certain. If there is a circlip at the bottom holding the lot together don’t reuse it unless you really have to.I recently put a set of forks together and showed assembly here http://racingrhino.wordpress.com/2014/06/18/front-forks-and-getting-ready-for-chrome/. Clearly you just do the opposite to get the springs off.

none of the above

they are the forks with the damping adjustment knob on the top…
Also compared to other Guzzi forks I’m familiar with the damper unit is at the bottom instead of the top in effect upside down compared to a Le Mans 1, T3 etclemon2014-06-26 09:33:41

Just had a look at the parts diagrams on Stein Dinse’s site http://www.stein-dinse.biz/eliste/index.php?sid=cfcfg161a78gg&lg=en and I see what you mean - completely different. Don’t know if looking at these diagrams sheds any light on the subject.

those Stein Dinse diagrams are very useful, always use them but this time no help

The forks are shown in the Spada 1000 Guzzi manualIts not hard
to do, its easier to take the complete spring/damper out of the tube,
then its just a matter of compressing the spring, undoing the lock nut
on the damper rod and unscrewing the top cap after removing the adjuster
knob of course, you can wind the preload adjusters right off too to
make it easier to compress the spring.

Managed it in the end - simple: 1 person compresses the spring and there’s a 13mm lock nut and an 11mm recess on the tube. A good exercise because after dismantling I could see the dampers were knackered. I’ve bought FAC alternatives, cheaper for a pair than 1 bitubo and some say they’re better??

No experience of Bitubo but FAC excellent.

I tried FAC dampers in my LM5 and was very disappointed with them, in fact they are still lying in the guzzi spares box in the garage where I chucked them after trying them for a few weeks.You can modify the existing dampers by simply drilling holes in the damper cartridge and then simply filling the fork bottom with fork oil just like a Jap bike, obviously you have to be careful where you put the holes or you won’t have any damping, no plans to strip my forks in the near future but next time I do I’ll take some pics and it may help someone in the future.

Use FAC’s on my Spada big improvement over standard.

Hi,
Just taken my 1994 Strada fork legs off to replace the weeping oil seals and to check on the dampers and the springs. I think that they are probably the same as the Spada 1000 forks as mentioned by Lemon and Guest some years ago but I am not sure and would appreciate confirmation or otherwise, can anyone help - please see photo?
I want to remove the springs to check their length to see if they need renewing so obviously I need to remove the dampers or the adjustment end sub assy, somehow.
Thanks,
Charles 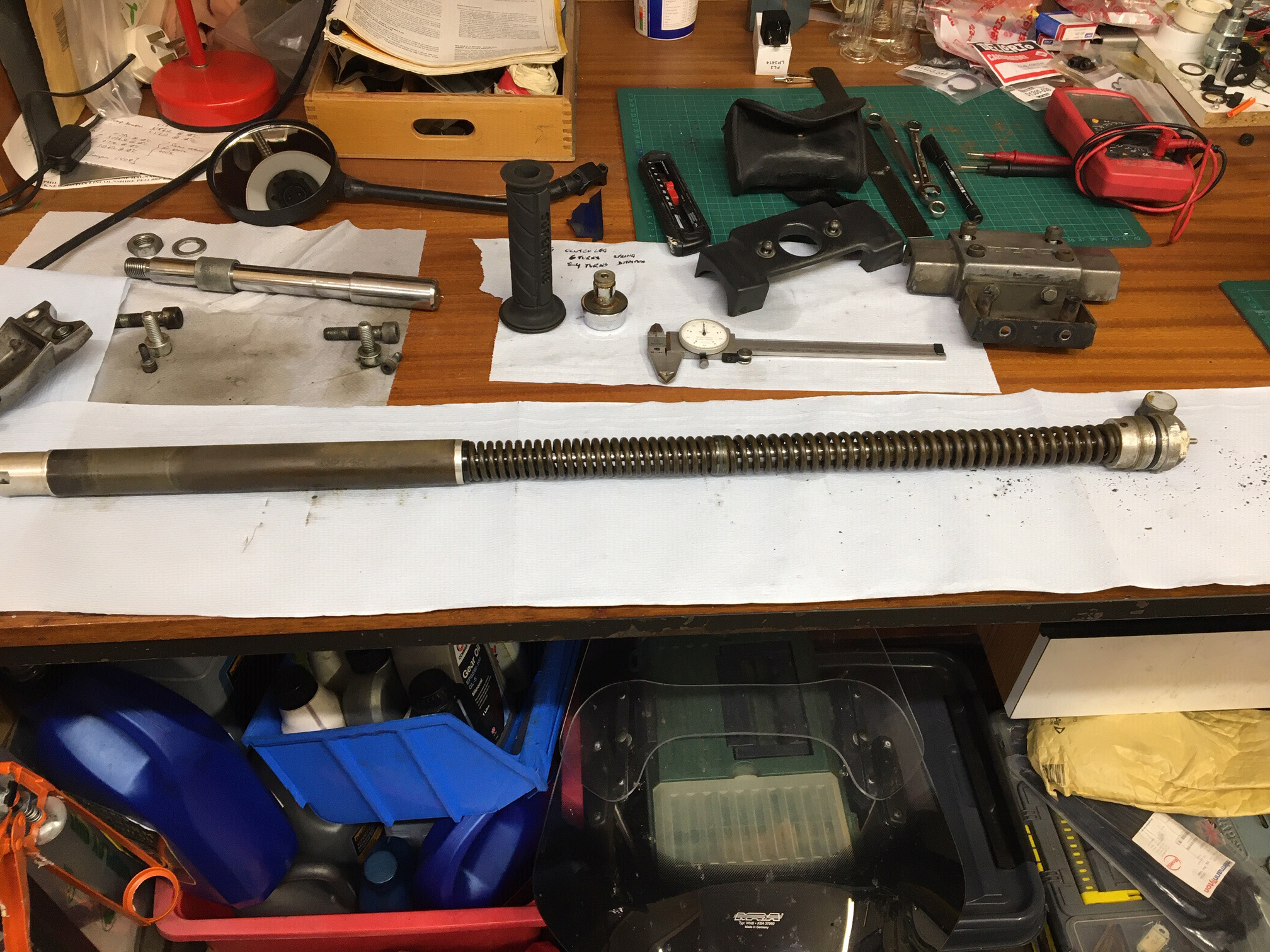 Yes, they look exactly the same as the 40mm LeMans 5 bitubo fork.
Simply pull the springs down away from the fork top nut and you will find the lock nut and flats on the damper rod described above, then unscrew the top nut, easy really

Thanks Keef, much appreciated.
Charles