This was started already under a different topic, which now has split info in its replies, so here some info under a new Topic:

The design of the V85 is loved by many, and especially outright off-roaders are quite happy with how the bike looks.

Those that are more after the ‘Adventure Touring’ aspects of the bike are generally complaining about the rather measly protection of both rider and bike against road grime.
From own experience, even a clean-looking road will, when wet, result in dirt being thrown not just under, but even on top of the TopBox! And let’s not even start with the front of the engine…

But there are options!
The to date most favoured one is the front mudguard of the Aprilia Caponord 1200 Rally, Model Year 2016. It only costs £30.- to £40.-. It can be mounted as a direct replacement of the fork protectors, as it uses the exact same 6 mounting points. It can be ‘worn’ as an additional mudguard, with minimal optical impact. It can also be used as a full replacement , losing the ‘beak’.
But it comes with disadvantages: a) the visual impact, b) it is moulded to look like carbon fibre, c) one loses the coloured fork protectors (or has to re-paint them onto the new guard), d) it is too short in itself, and requires the addition of a (readily available) extension, e) there is a hole in it to fit the brake pipes - this needs to be plugged, and f) it takes usually 3 to 4 months for delivery…(that was before the Virus lockdown!)

Pyramid Plastics are working on their own model of front mudguard for the V85, which will instead fit via a bracket that mounts to the brake caliper bolts (meaning the original fork guards can stay in place). But: They are still working on the design, and they don’t expect them to be available for some 8 weeks. I don’t yet know what they are going to look like, or how far down they will reach. There is also no indication of price yet…

As for the rear - again, options:
Pyramid are also designing a hugger. The same ‘buts’ apply as above.
Another alternative is a generic rear guard that looks a bit like the BMW ones. It’s sold on Ebay as ‘for Honda NC700’, is fairly cheap, and can be adapted (some hacksawing, and some new holes need drilling) to fit the existing threaded holes in the Bevel Box. But beware - they must be positioned carefully, and relatively close to the tyre, as they will otherwise foul the tail (reflector)!

I personally am quite happy with the Aprilia front guard as an additional one, I’ll post a piccie once I am finally finished with sanding and painting it.
I am also quite happy with the generic Chinese NC700 guard in the back. No painting required (though I did have the bracketry powdercoated after adapting it), so it is installed already. I re-post the pic, as the other one is hidden in the ‘Sump Guard Bolts’ thread…
And believe me, it works! No more mud on my back, or on top of the luggage!! 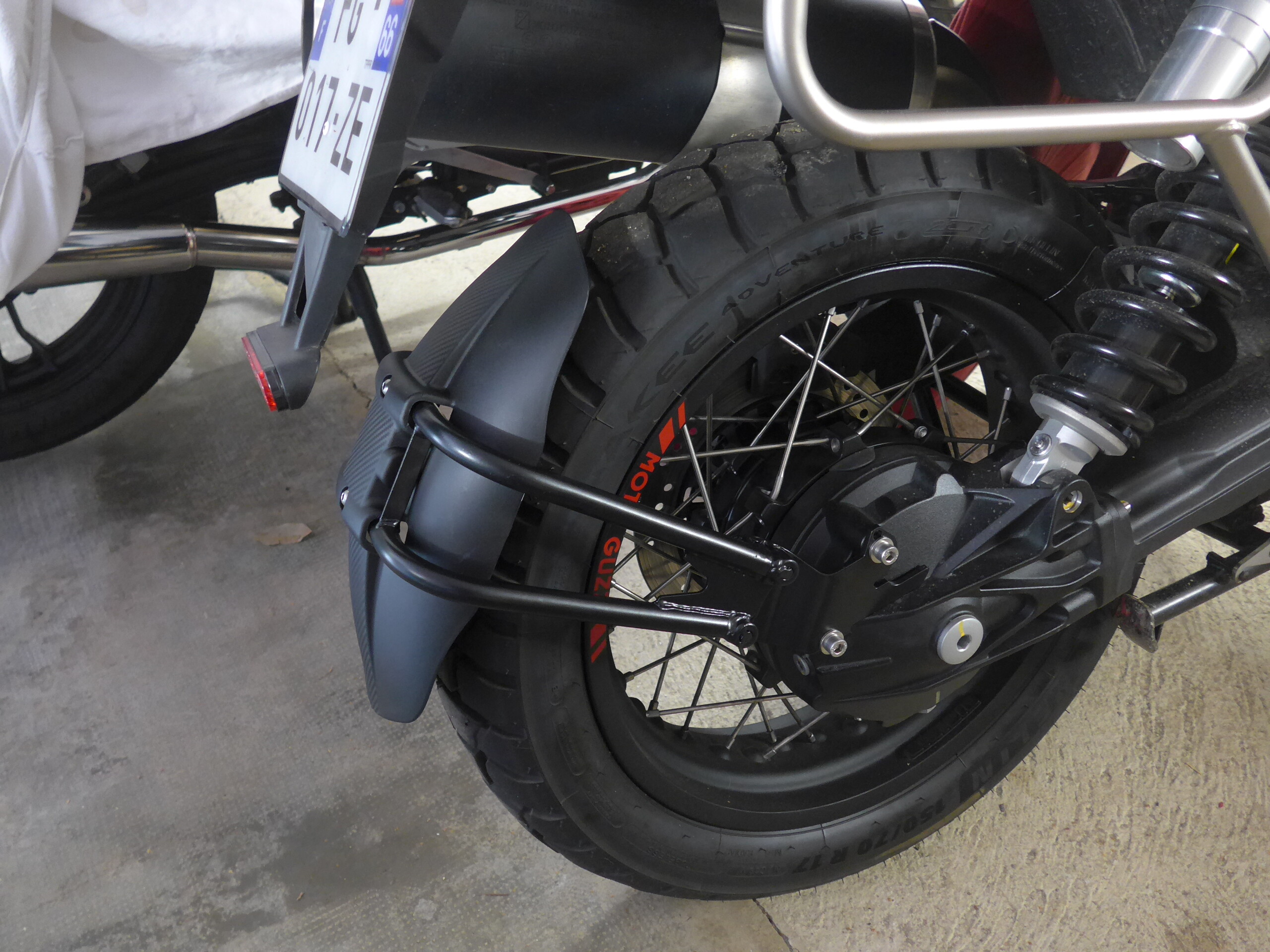 Here a first render of the design that Pyramid Plastics are working on!
(copied from Facebook with Adam’s permission) 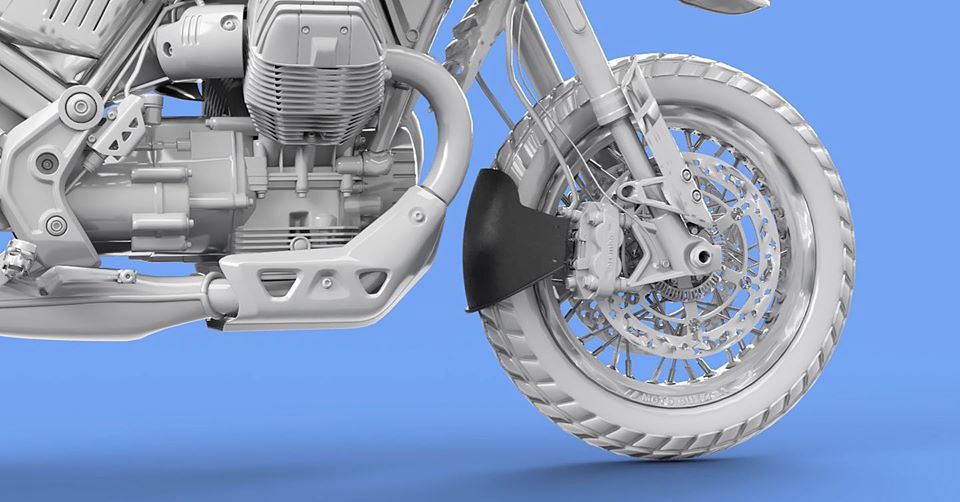 … and here finally my take on the Aprilia front guard.

(The colour used is not a 100% match, but close enough for me. It is “Nissan ZHJ Arctic White Effect”. The triangle and stripe come as transfers, together for each side, as genuine Guzzi spare parts (cost was €8.- each side) 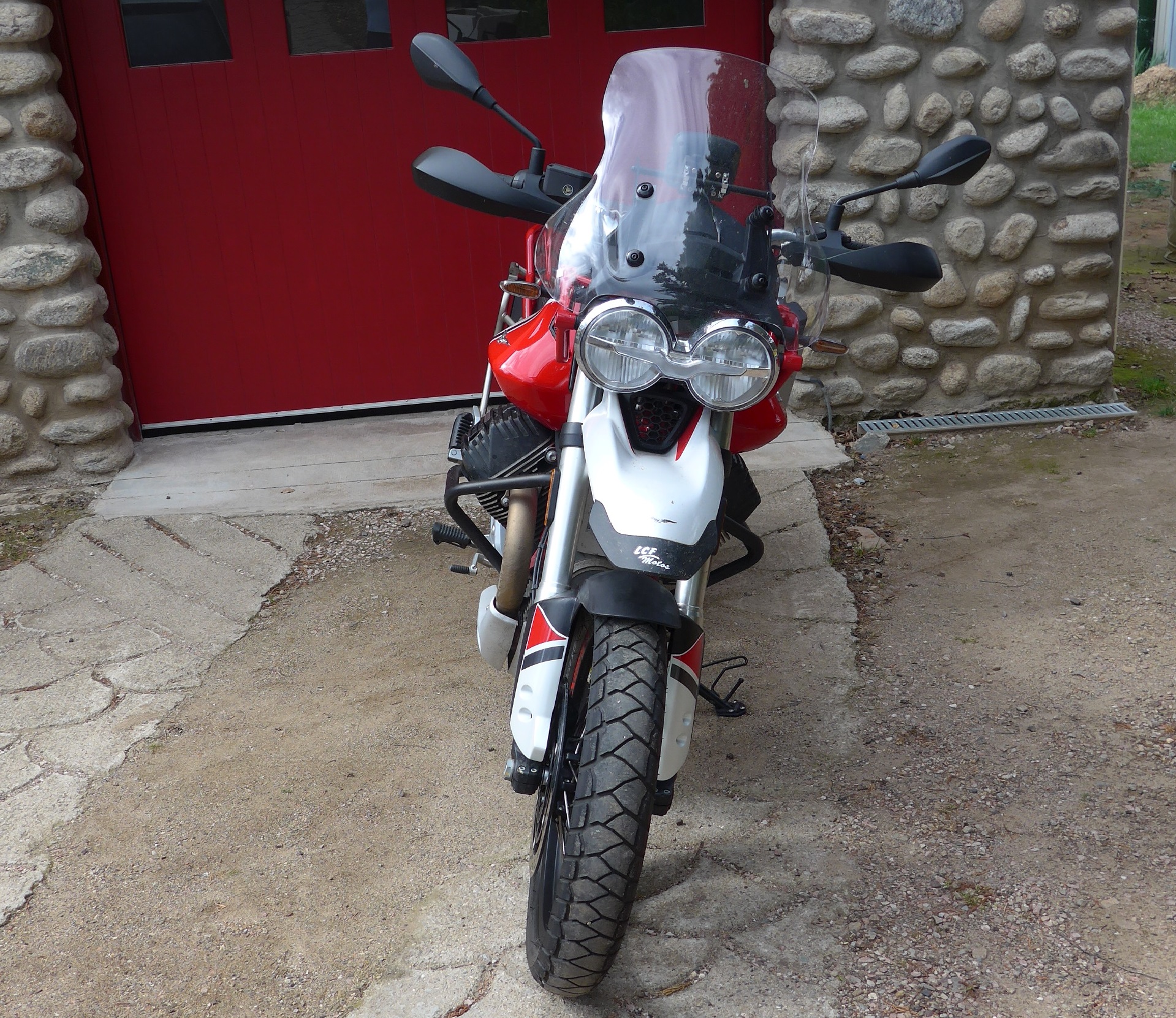 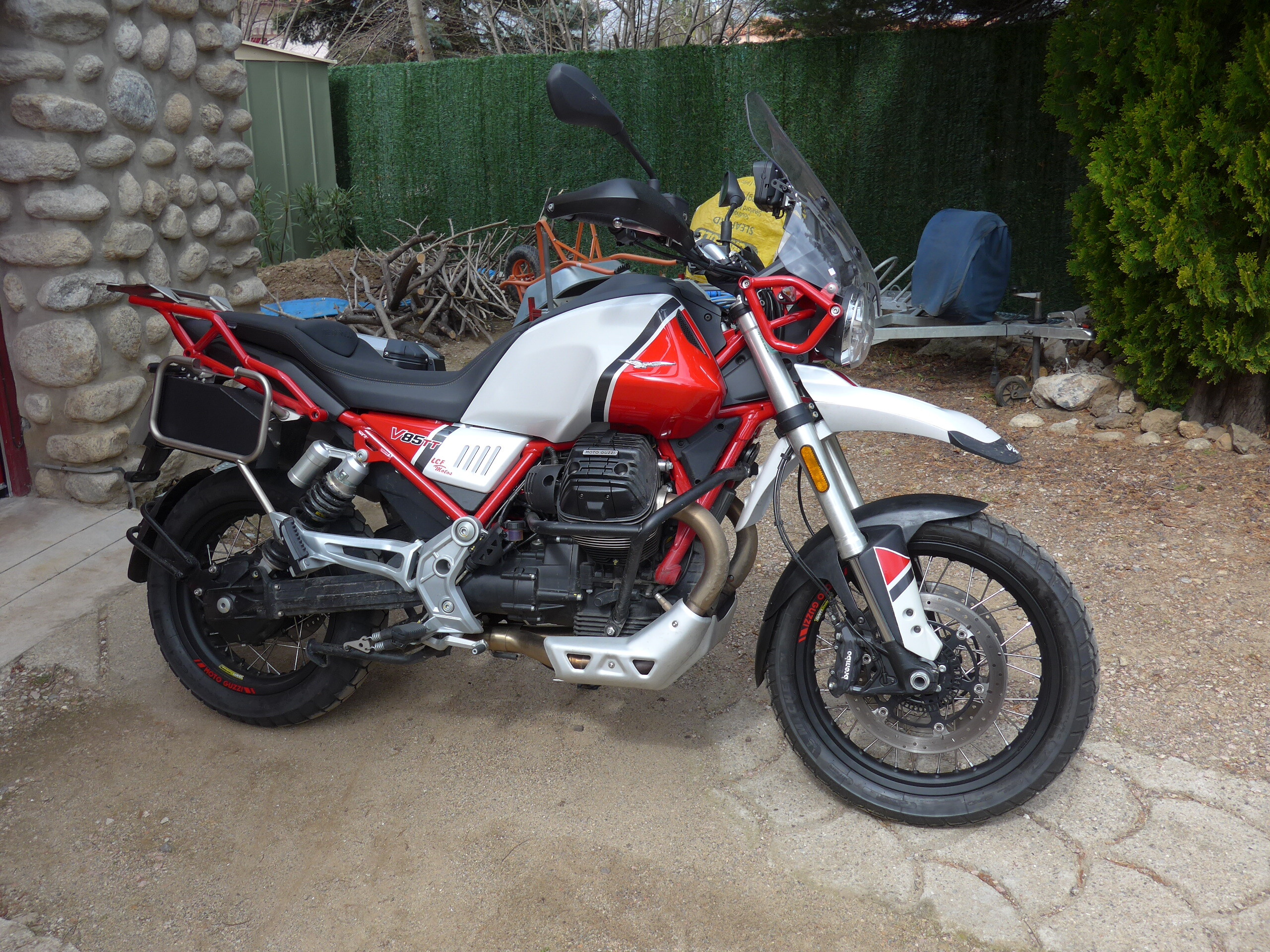 Mudguards which don’t protect much of anything are one of my (many) bugbears with modern bikes, which are invariably triumphs (pun intended) of form over function and cynical exercises in selling factory upgrades.

As someone who lives in a rural area, “on-road” is often closer to off-road. As such, and despite a front mudguard extender, my V7 111 invariably returns home covered in filth, both front a rear. Just as well I get satisfaction from washing and polishing my pride and joy.

Hi, thanks for the useful info. I looked on ebay for a rear guard, there is one by Romano Sport for around £35 - from China. Would that be the one you got ?
Cheers
Andrew

Do you not think it looks a bit odd with two front mudguards?

Hi, thanks for the useful info. I looked on ebay for a rear guard, there is one by Romano Sport for around £35 - from China. Would that be the one you got ?
Cheers
Andrew

Ooohh… I honestly wouldn’t know. Don’t remember. Got it via one of those online shopping companies rather than Ebay (Alibaba or so?), basically searching for a rear mudguard for ‘Honda NC700’. Then just looked at the pictures.
There are several ones that will work, some have a load of additional reflectors on. I picked mine because I thought it looked less obtrusive.
This one looks like mine:

Sorry, cannot find the one you mention.
Peter

Do you not think it looks a bit odd with two front mudguards?

That is somewhat of a dilemma, Chris. As I said in my original post, for some the styling is paramount (and I agree - the ‘beak’ suits the bike). But there is also no doubt that it just doesn’t work as a mudguard should.
As solutions go, there is at least one owner who has removed the beak, and uses the bike with the (sanded down, and fully re-sprayed in white and colour) Aprilia mudguard instead. Others have removed the coloured fork guards, and run the Aprilia item as it comes (black fake carbon look).

There is other bikes out there who have two mudguards as standard, straight from the manufacturer (e.g. BMW GS).

I must say, from the rendering above I personally think the solution suggested by Pyramid will be far more optically intrusive than the Aprilia mudguard.
I wanted to retain the original look as much as possible, whilst simultaneously getting a mudguard that does what it is supposed to. In my opinion, it worked well enough, with the painted-on fake fork guards tying in with the rest of the bike, and making the flat black lower mudguard appear as invisible as possible.
Yes, it is a compromise styling-wise - but it is worth it with regards to function (at least for me).

For the first time since fitting the Aprilia mudguard (with the cheap Spanish extender), I’ve been out and encountered some wet spots on the road. As one can see, despite me going rather slow, the bash plate is still covered up to its top, but the alternator cover has remained clean - which was the main intent of fitting the additional guard.
I personally find it amazing though at how steep an angle the moisture is getting thrown up, and as anything that gets thrown into the ‘beak’ will be driven backwards through the slots by the air, I’ d suggest to be careful when considering all the different options and designs… The engine front plate has by now proven in multiple cases that it’s finish is NOT up to the abuse it gets without adequate additional protection!