I had to be rescued last night, fortunately not a long way from home, but missed choir practice! Had to wait 3 1/2 hours!

Been having a few issues with the idle recently. The bike was being used regularly and going well, but suddenly went to a fast idle after a hot start. I rode home a few miles, and then when when I went to restart to put back in the garage, I got the dreaded click and it would not go. I put the omni thingy on and the battery was pretty low, which surprised me as it is quite a new battery and I had been using the bike quite a bit. I charged up and then started and ran OK, albeit still with some variable idle speeds. I fiddled with the throttle cables but they seem to be adjusted correctly.
Last night then, I set off up the M5 and got about 5 miles when the ABS warning light came on. a short interval later the red management light came on, with “SERVICE” on the instrument panel. I proceeded off the motorway as the next junction was just there, and the bike stopped. Trying to restart, the warning light had gone and the sequence seemed normal, but no life. I had a look under the seat for any loose connections and found that the battery earth terminal was slightly loose. It is one of the Motobatts where you have to mount the terminal posts yourself. I assumed this was the problem and tightened it, then tried again to restart. I got the normal start sequence then with no warning lights staying on, but just the solenoid click. I assumed then the battery was flat again. My lovely partner then came out and we succeeded in jump starting the bike instantly from her car, and it ran normally for a minute or two (no warning lights). Planning to ride home then, after a while it faltered and the red warning triangle came on again. We tried again and got it stated again, the engine seemed normal for a short while, revved it a bit, then warnings lights started to come on , then all the lights went out, and a shirt while later the engine stopped again (I assume from fuel starvation as I guess the fuel pump was not working of the electrics had gone out).
The engine sounds normal and the oil looks fine, I don’t think there is anything mechanical wrong. My first thought normally would be duff battery, but it has only been on the bike about 4 months and I have used it quite a bit.
I was wondering about the alternator. The belt was replaced about a year ago, and there is no indication I can see that there is anything wrong with it, but is there anyway I could check the output easily? How long do they last, the bike is 11-12 years old and has done 58,000?
Could I have bought a duff battery? I don’t like the fact that you have to mount the terminals with a small machine screw as it doesn’t seem robust enough to me, and the negative seems to come loose quite easily. Any thoughts? I have charged it twice recently, and it seems to take charge and go to maintenance current OK, but seems not to be holding over a long period. How can I check if the battery is duff? Amy experience with problems on these, or issues with the terminals?
Also wondering about a poor earth. I cleaned this up 3 years ago after I got the bike but maybe it is loose? I can have a dig to check.
Any other thoughts?
I suspect the idle issue and the stopping issue may be separate, but maybe not. I was thinking along the lines of a sticky stepper as the explanation for the idle problem. I had a look but it seems to be incredibly inaccessible and would probably have to get the whole airbox off to get at it. This is too daunting for someone like me with limited experience.
Very frustrating when things are just opening up and stuff planned, and the bike suddenly doesn’t work!!!

Hi
I suspect that you may not be charging as you said that you put the battery on change earlier and all was ok for a short time. That would lead me to suspect the alternator. Have you tried charging the battery then checking the voltage before and after starting. You should be getting around 13 volts with the engine off and 14 plus volts with the engine running if the alternator is charging.

Thanks, yes, I think I will try that.

Can an alternator work partially? I thought they either worked or they didn’t tbh. Normally I would expect to see a charge light come on but not sure if these bikes have them. My Le Mans has a voltmeter so you can always see the state easily.

My Breva 1100 experienced high idle, headlights some times not on, battery apparently not charging, intermittent starting problems. Eventually found to be an issue with one of the 30amp fuses. Believed to be a hairline crack in the fuse before it eventually blew while trying the determine the problem. Replaced both fuses and cleaned their holders and the problem completely disappeared.

I have heard of a Sport 1200 having similar problems which turned out to be dirty 30amp fuses.

Thanks. Will check the fuses and change them if I don’t find a problem with the alternator. I had a brief problem with a 30 amp fuse blowing repeatedly on my 1200 Sport, did it a few times and then no more.

Why did you replace the Motobatt?

My Breva 1100 experienced high idle, headlights some times not on, battery apparently not charging, intermittent starting problems. Eventually found to be an issue with one of the 30amp fuses. Believed to be a hairline crack in the fuse before it eventually blew while trying the determine the problem. Replaced both fuses and cleaned their holders and the problem completely disappeared.

I have heard of a Sport 1200 having similar problems which turned out to be dirty 30amp fuses.

. Well, looks like I found the pesky culprit. Full marks to Macker and I definitely owe you a pint if I ever bump into you (will be at the Guzzifest) This is one of the main fuses and looks like it has been arcing somehow. Cleaned up the holder and put a new one in and so far all is fine, including my variable idle. I have been checking the voltages a lot as well, including after a test ride, in case I also have a charging or battery problem. The battery voltage is higher whilst the engine on, so it is definitely charging, although it is only about 13.6-13.8 volts initially (no engine, 12.9 volts). After a 20 mile ride yesterday with no issues, the battery voltage engine off was up around 13.22, which seems to indicate to me that it is charging fine. The battery voltage when you rev the engine doesn’t seem to vary much btw.
Incidentally, I found it was fitted with a 40 amp fuse, even though the manual says both main fuses should be 30 Amp. I put 30 Amp back in and it seems fine. 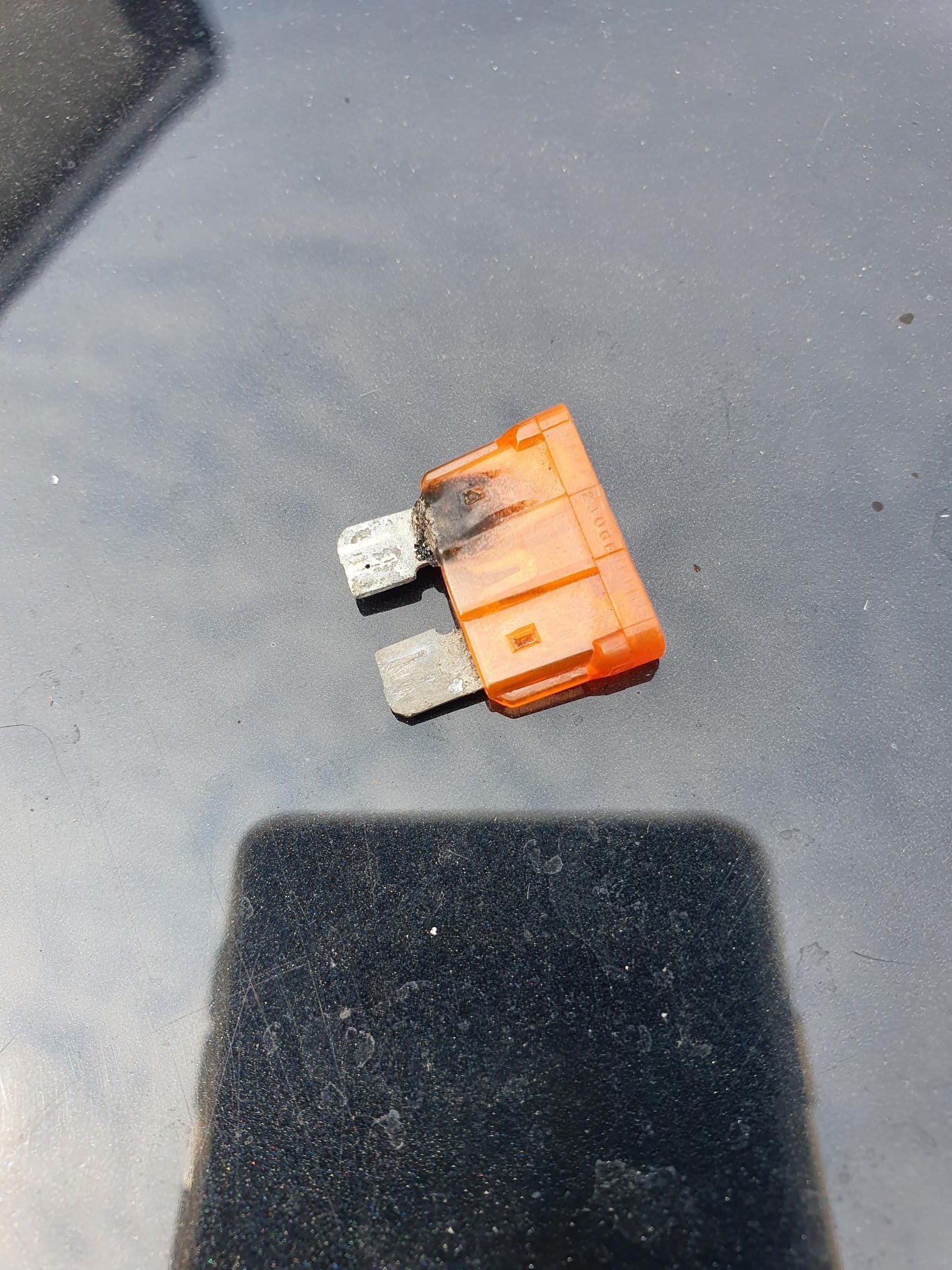 “The battery voltage is higher whilst the engine on, so it is definitely charging, although it is only about 13.6-13.8 volts initially (no engine, 12.9 volts).”

If you read the voltage using the volt meter in the dash it could be reading low.

On my old Breva 1100 I checked the reading on the dash against my volt meter (and a calibrated one borrowed from work) across the battery and the dash read 0.5v low

It is reading lower on the dash. The readings I gave were from my new hand held multimeter.

I rode the bike for a while with the volts on the dash, and it was surprising (to me) how little they varied. Generally when riding along at 30-60 mph it read about 12.8 to 12.9 volts, whatever the revs.