Anyone here ever ridden out to the North Cape?

I quite fancied it until I checked the mileage from Calais. Looks like I’d need to do two oil changes out on the road. Shame the Esbjerg crossing is no longer functioning.

I know of at least 3 Guzzi club members, 2 Stelvios and 1Norge, that have done North Cape run. Hopefully one may be along soon.

My dream trip. Doubt I’ll ever get to do it!

I got talking to a guy on a Pan European coming back on the cross Channel train the other year - he was just coming back from there. He reckoned the ride up was great, but not so exciting after you had to turn around at the top and then see it all again on the way back. But it kind of caught my imagination - certainly a proper road trip.

Went there in 2011: up via Finland then back along coastal highway including Lofoten islands. Brilliant trip. 25c most days - warmest june they’d had for decades!! Not cheap though…

Money is less of an issue - available holiday is. How long did you take doing it, and what kind of mileage days was that?

Hmmmm, maybe I should bring my deerstalker along to the next branch meet.

Hmmmm, maybe I should bring my deerstalker along to the next branch meet.

Good heavens Holmes, I think this one is alive!

One of my dream trips is to ride from the Sahara to the North Cape and back. I reckon the route I have more or less planned would be around 10,000 miles and could be done in 40 days or so. Trouble is there is no way I could ever get 40 days off work, and I don’t know if I will still be physically capable when I retire.

Drove a hire car there. Total mayhem with camels and donkeys all over the place in Marrakech. I was very glad to get out of town in one piece. The roads are then fairly quiet. The main hazard then is a small child appears wherever you stop and tries to sell you jewellery, pottery, carpets etc

One of my dream trips is to ride from the Sahara to the North Cape and back.

Ha, I must admit I thought of that many years ago as being a real cool trip, Sahara and Arctic Circle in one ride. Not sure I’ll ever get around to it either though.

Yes, done a couple of enduro type weeks out there. Just flew out and joined a group each time - so like a guided tour really. First time was mostly on deserty plains and quite quick, second time was more up in the hills. Had support vehicles and stayed in various pre-booked dodgy spots along the way. Good fun.

Never ridden to Morocco. My second time in I actually flew into Malaga and then we ferried in from around Gibraltar. The border is on the African side and looked like total anarchy, not sure I’d want to try that on my own.

A pal and I rode to Morocco in 2004 (I think) exciting to be in Africa for the first time, it was just after the earthquake but the roads were of. Did the Riff, mid Atalas, Fez, down to Merzouga to see the ergs (big sand mountains) then from the Sahara to Marrakech over the high Atlas. After Marrakech we got fed up with the constant expectation from the locals to be paid if you even looked at them so headed back to Tangiers and then the following day rode across Spain to Denia to get the ferry to Ibiza to visit my mate for a day before heading back to the mainland and Bilbao and home. 4000 miles in 10 days, great trip. Took a pair of Triumph 955l’s, a sprint and an ST , no issues except we didn’t get far on the sand!
Funny enough my buddy in Ibiza rode to Nordcap from his home the year earlier on his Norton Commando, enjoyed the ride up but got a bit fed up on the homeward leg, especially since he got sideswiped in Norway and bent the bike (still got him home mind you via the uk to get new yokes and some other parts)

To add some colour, a photo of my Triumph in the desert at Merzouga (we couldn’t get any further than here) 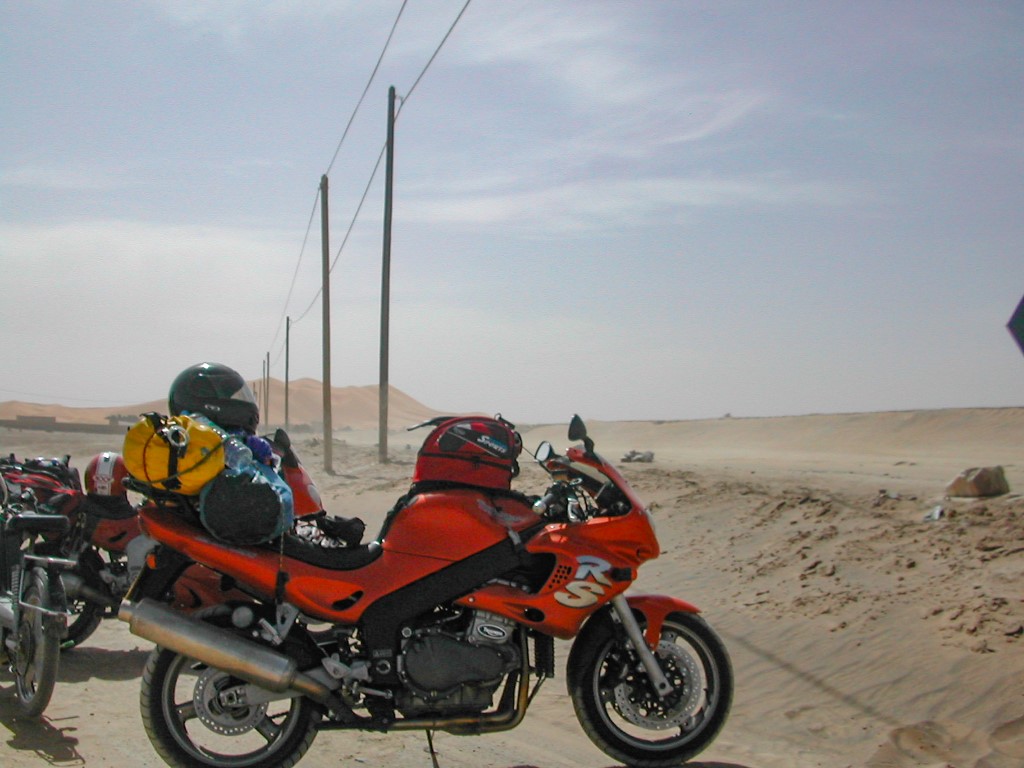 … enjoyed the ride up but got a bit fed up on the homeward leg, especially since he got sideswiped in Norway and bent the bike (still got him home mind you via the uk to get new yokes and some other parts)

Hi Butch,
I’ve just found this thread. I did the trip to the North Cape back in 1990 ( on my second Guzzi ). It was awesome and I still bore people with stories of my trip. We went in late June so we had the full benefit of the mdnight sun, but still plenty of snow after passing the Arctic Circle.
I can bring my photo album to the next Essex branch meeting. No digital pictures as this was well before digital cameras and smart phones.

Sounds good - I’d love to see that. I’m marginal for the October meeting in Witham is all. Dependent on how quickly I can coax my Camel back from the top of Norfolk whilst in the company of a 225 Serow.

No problem. Let me know nearer the day. It’s a pity there is no ferry between the UK and Norway but, as you’re in Essex, you could use the ferry from Harwich to Holland. That would be better than riding to Calais and all the way back up again.
Meanwhile, I have heard that P&O ar considering openning a new route between Scotland and Norway.