Hi chaps. Can anyone tell me definitively how much oil I’d need to use in a Daytona engine fitted with an oil-cooler & sump spacer? The dip-stick markings are no longer relevant!

Same oil volume but you will need a longer dipstick

If it’s like others I have used, the idea was to increase the distance between crankshaft and the surface of the oil, and increase the internal volume of the crankcase, not to make more room to put extra oil in. What I did was put in the normal, measured, amount, then see where it comes on the dipstick, that’s maximum.

(I did have an extended dipstick but it broke and fell off inside, so bought a normal one and used min as max.)

Have you got an extra space?
On the Daytona/Centauro engine ,it goes , bottom of the crankcase, standard sump spacer (that the oil cooler pipes flow and return from) then sump cover.
That would mean standard amount of oil and standard dipstick .
An extra space would put the sump really close to the ground,
Phil

Thanks for the replies, chaps!

That’s an interesting point, Phil. I didn’t realize the ‘standard’ Daytona had a sump spacer: I just assumed this was an addition. This engine’s in a Magni. Here’s a picture: maybe you can confirm??

Your’s is different compared to the standard, ( tried to post a pic of mine, no joy),
On the standard spacer the flow and return oil lines both come off the front right face, (looking forward) it’s about 28mm deep and wider at the bottom than at the top,
Hope this helps, (and makes sense),
Phil

Both me and the OP were fooled.

Having searched the web, I’ve discovered how the standard Daytona sump & spacer looks (see brochure pic). The Daytona RS item is a bit different, but if anything its sump is shallower still. The spacer on my bike’s engine appears to be a fair bit deeper than either of these, so it would appear it’s not OEM. Therefore an OEM dipstick would surely be too short to be of any use…?

However if, as mentioned above, all the spacer is for is to give more clearance twixt the crank & the oil, then my original question is answered: I’ll simply stick with the capacity listed in the manual (…and maybe look for a longer dipstick!) 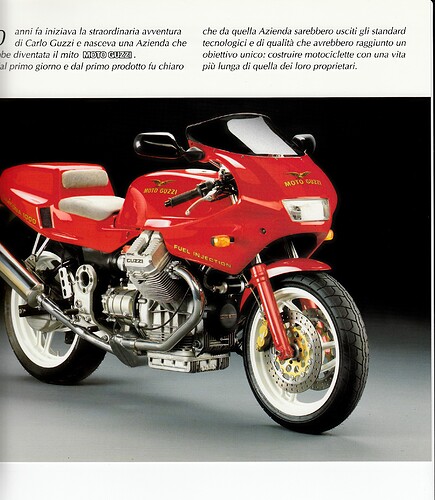 The Magni one looks like it has galleries cast through it to allow cooling air through, is this the case?
Whatever depth of sump extension you have the oil capacity should be the same, so measure it before you put it in on your next oil change and make a note of the level on the dipstick.

I have a sump extension with cooling air galleries that Baldrick had his eyes on when he rebuilt my engine, glad to say I still have it!

The Magni one looks like it has galleries cast through it to allow cooling air through, is this the case?

Yes, it looks to have been machined from a solid / cast block. I don’t know for sure it was made by Magni, though. I’ll check out its internals when I remove it for a filter change; see if I can find any identification marks.