I removed the starter from my 850T in order to paint it, and when I removed the cap from the end I found that it was really filthy inside. Also, and more to the point, I found it hard to turn the motor by hand. I would have thought that it should be easy. It certainly has been with other starters that I have opened up.
Can anybody tell me if this is normal for a starter like this? I thought it might be caused by the solenoid, but even when I push the motor into its operating position it still won’t spin freely.

Any insights would be welcome.

I did similar on my Spada recently (Bosch starter option). I guess there is quite a bit of friction in there with brushes etc. I did consider buying one of them dirt cheap Valeo copies as a replacement. You can get them for less than £50 off ebay. I went for the even cheaper option and put the old one back on. It worked fine before. It wasn’t broken, so gave it a squirt of WD40 and away we went.

I took mine apart many years ago to fix the centrifugal clutch (sprag clutch?) that engages the drive when it spins. Mine was filthy inside too, most of it dust from the brushes. I cleaned it all out with petrol and a toothbrush (no Autosol on the commutator ring in case I left any there to wear it) and had the end cap chromed. I sprayed the starter body with smooth silver Hammerite. It looks non-standard but makes the engine look bigger, just like the gearbox does from the other side! Poser moi? 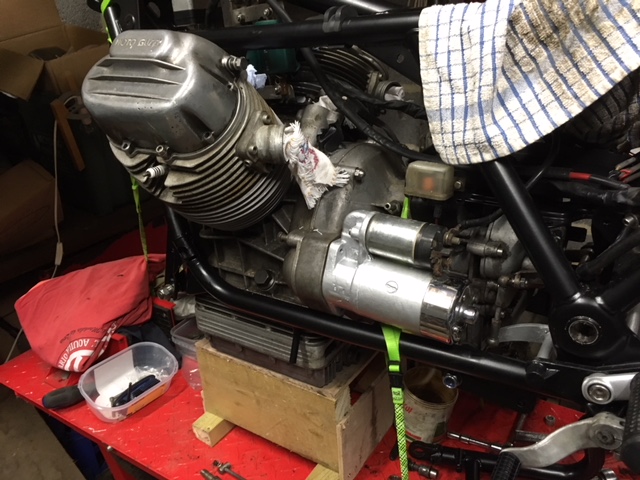 The scary thing is these photos were taken two years ago, and I had the frame shot blasted and powder coated four years ago! Time to finish it now I think!

Great minds think alike. I painted the Spada one with some left over 5 wheel silver that I had on the shelf so it matched the alloy of the engine, but didn’t go as far as to have the end cover chromed! 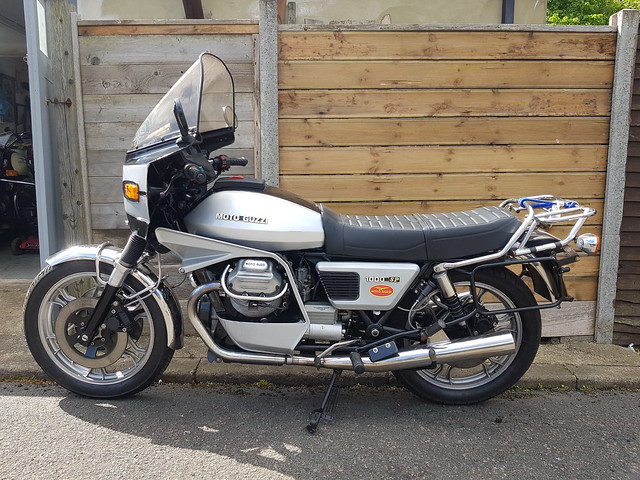 Thanks for your comments gents. I cleaned the inside of the starter and it is definitely working better now. Previously it was sometimes hestitant to turn the engine over, even when I had >12v in the battery. I had put this down to one of the pistons sitting close to max compression.
I repainted the starter in black, using a satin finish for the body and gloss for the end cap. It doesn’t look like new, but if it did it would stick out like a sore thumb. I now need to decide what to do about the very tired looking gear shift. 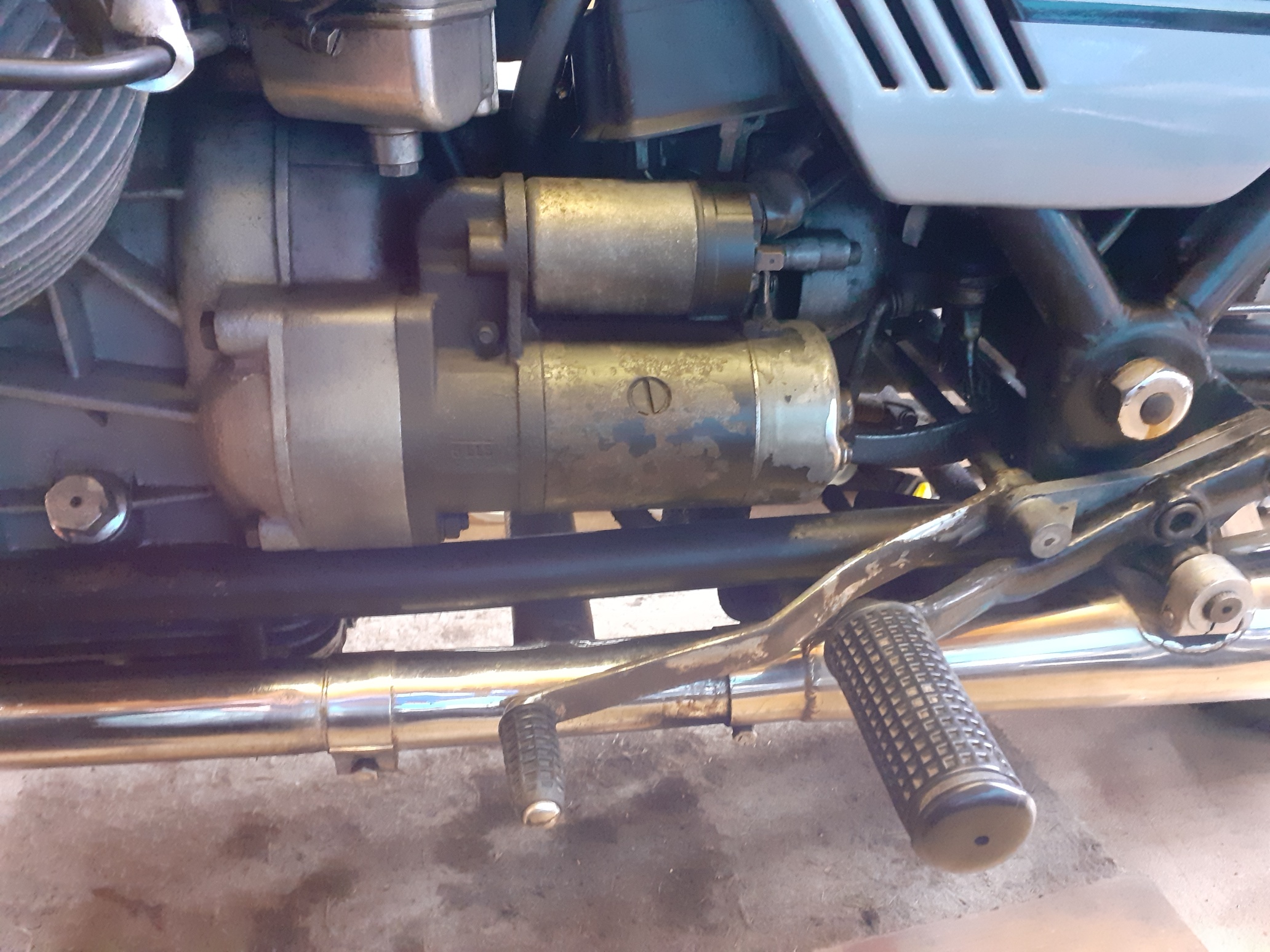 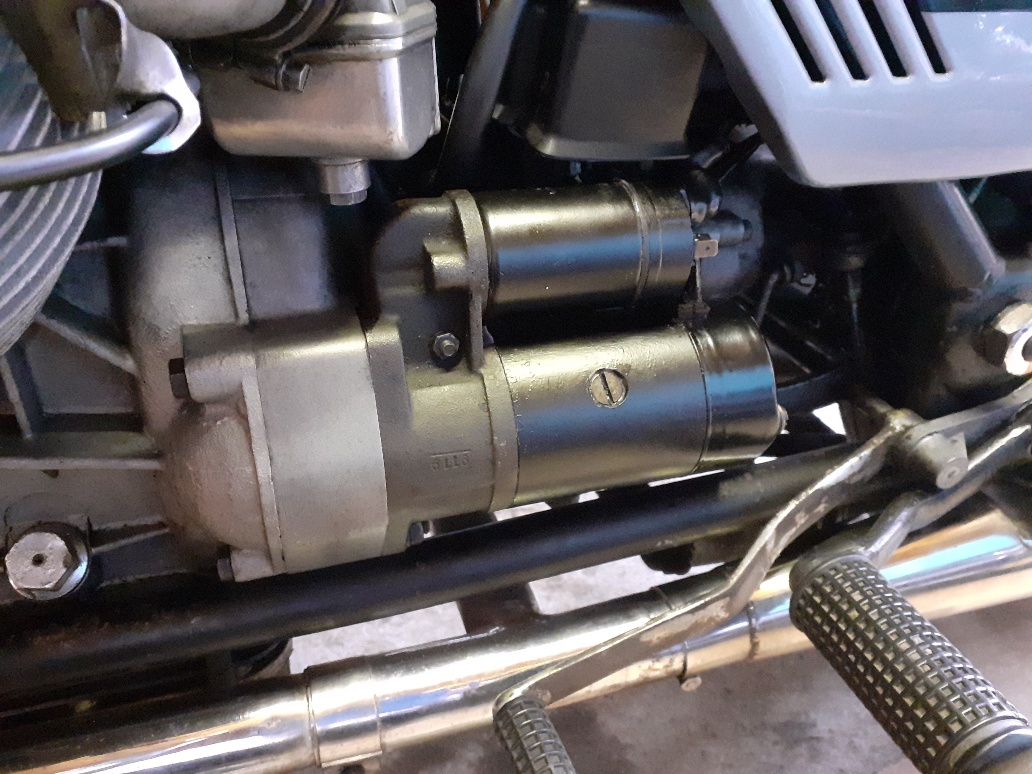 Chris, your bike looks like it’s nearly ready to roll. I hope I live long enough to see it on the road.

As for the levers, look up chrome powder coating. I have seen bits and pieces done with it and the results were quite amazing.

For my levers I used a rattle tin of silver smooth Hammerite (same as the starter motor). It looks a bit bling but soon dulls down.

Chris, your bike looks like it’s nearly ready to roll. I hope I live long enough to see it on the road.

I found some photos yesterday that I took of the powder coating… May 2018… where did all that time go? I have still to fit the wheel, swinging arm and stearing head bearings, rebuild the forks and sort out the tank and side panels (I’m thinking of going back to black with green stripes as it was 35 years ago!

I’ll be looking at the rusting unit that I took off my V50 the other week. Was working well enough but you make me think I should look a little deeper. I did find that one of the counter sunk screws that holds the solenoid thing on top of the main body was missing. It will get a blow over with black Smoothrite before it goes back on. It wouldn’t be the Black Pearl if I started spraying things silver.

BTW - you running a right side shift from the cross over on that bike Chris?

BTW - you running a right side shift from the cross over on that bike Chris?

Oh yes, I converted it many years ago when I was running both this bike and my Triumph. I kept stamping on the gear change rather than the back brake, so I made them match. It is an easy enough job on an 850T as this was the model that Guzzi first swapped them over as far as I am aware. I did have a post on here and have now reloaded the photos as photo(sic)bucket have reduced the quality and graffitied them.

Powder-coat chrome sounds like a good trick. Thanks Don. Also, silver Hammerite is worth looking into. I’ve also seen rattle can chrome in car accesories shops, which must be worth investigating. Real chrome would be best, but I know it can be expensive. Watch this space.

The real advance is in the performance of the starter. After cleaning inside, it is much better at turning the engine over.