T3 with a slight oil leak

I think I have a slight oil leack which appears to be coming from the rear of the oil sump gasket. Just a couple of drips when I came back from a run and the engine was still hot, then nothing since as the engine cooled down.

I’ll just check that the bolts holding the sump are torqued up, but otherwise I guess it’ll have to come off and a new gasket fitted.

All the bolts are very tight, but I have noticed that oil has indeed weeped from the gasket at the rear left side corner, and perhaps a little on the right side as well.

The gasket doesn’t seem to be seated correctly as it is proud of the block and sump at both rear corners - it sticks out so much that you can actually grip it between finger nails and bend it! I am pretty sure that’s not right… can anyone confirm?

I do have a spare gasket so i guess when I have time I’ll have to drain the oil and get the sump off.

Doesn’t seem right to me. At risk of stating the obvious, you are sure it’s not coming from somewhere higher up and running down the sides?

Doesn’t seem right to me. At risk of stating the obvious, you are sure it’s not coming from somewhere higher up and running down the sides?

Good point - I did look for signs it might be coming from higher up, but nothing obvious.

Removing the sump and changing the oil filter inside should be part of your regular servicing. If you do decide to remove it, there are the bolts around the edge and 4 in the centre of the sump. These catch everyone out first time they do the job!
Gaskets do generally fit fairly well, but maybe you have a poorly made one.
Oil certainly can flow from above and flow. Clean it down thoroughly, take it for a ride and see if you can see any signs of it running down from higher up.

I did have a look higher up, and all seemed lovely and clean with no signs of oil.

I have done the job before in the past on another Guzzi, but it’s a shame to empty the oil, drop the sump and fit a new gasket, as an oil and filter change had only been done recently by the previous owner.

No need to throw the oil away, drain it into something clean and keep it to refill later.

I’ve done that before now

Check the gasket is the right way round or else it doesn’t seal the oil ways up from the sump. It’s always worth checking things like that on a new to you bike.

Good point I think it’s 3 holes at the front 2 at the back, orientation of gasket must match exactly. If not, no oil pressure.

Thanks Mike and Don for your replies.

Good point about reusing the oil! And I won’t bother to change the filter this time round although I do have a spare ready.

Other than making sure it is the right way round, and that the contact surfaces are prepared and completely clean, are there any other tips for fitting the gasket?

I did see a suggestion that you can put a form of grease to help keep the gasket stuck to one surface whilst offering it up to fit onto the other. Is that a good idea?

I always grease gaskets, it aids their removal.

I’m almost but not quite a complete idiot…!

I thought before dropping the sump I’d go for a nice run over to Swanage for a coffee and breakfast, so that by the time I got back there might be more evidence of where the leak is coming from, and there was…

It’s from the filler plug!! I hadn’t noticed it because it was not that obvious that the oil was seeping down directly behind the lower part of the frame. I had previously thought that the oil I had seen on that part of the block was being smeared up by the wind from a leak in the sump gasket.

Speaking of which, the filler plug has a metal washer, but no rubber sealing washer, is that correct? (I will look at the Haynes manual and Fowlers Parts for myself but it would be good to get confirmation).

Hi Jim,
I’ve never seen anything other than the metal crush washer on my Tonti bikes ( I’ve owned 3 ). The Haynes manual certainly doesn’t show a rubber washer.
It is best, but not always necessary, to change these when you change the oil.

Thats a nice end to an annoying problem, saved a lot of faffing about. I Always put a couple of turns of ptfe tape round the threads when I refit the dipstick just as belt and braces. There is no rubber seal.

There you are, so Don was right.

And it can get spread about by the wind of travel. Never heard of the filler / dipstick leaking, and don’t remember any kind of sealing washer either. So don’t know what that’s about.

I replaced the crush washer, and then took the bike for a nice ride out and to be MOTd, and still found oil seeping from around the oil filler plug.

The MOT tester and mechanic both looked at it, and confirmed that the plug does seem to have a breather in the centre where the dipstick rotates. The photo below shows the top of the filler plug and oil is seeping out from the central indent which is the top of the dipstick and freely rotates.

Is this the correct part for a T3 or should I look to replace it? 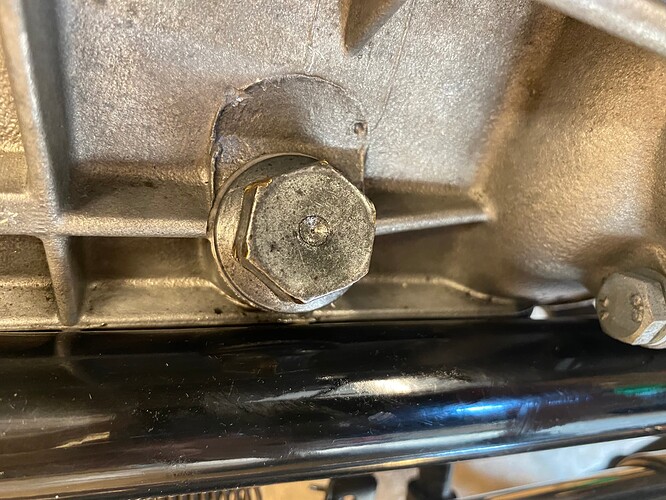 Thanks for any advice!
Jim

No ‘crush washer’ as such at filler/dipstick, afaik. Parts book shows a ‘gasket’ (Gu12011800) for T3. Definitely a ‘crush washer’ (fresh is good) at oil drain plug (lower rear crankcase).

Original dipsticks (see image below) had a copper (?) tube brazed into a nut - the ‘tube’ part tended to wiggle loose over time and this may result in the indent you report (don’t know how they were constructed, but a drilled nut, then tube brazed in sounds feasible) - you might then get some oil seepage here, under pressure, hot, running, but not much leakage I would have thought. Unless you’ve over-filled by some measure.

Generally, an original dipstick will have expired by now, due to age etc. and been replaced by whatever equivalent was available to previous owner. Newer replacements (plastic, or metal) commonly have an o-ring component. between ‘nut’ and crankcase.

Edit: I stand corrected - an 850T parts book ( so much is common on the big blocks ) lists the same ‘part’ in this context as GU95100709 (again described as ‘gasket’) but a search on this part no. shows it described variously, but “crush washer aluminium” at Gutsibits, and dimensionally (and functionally, one presumes) the same as for the drain plug. Apols - my ‘original’ dipstick has long since run away from home. 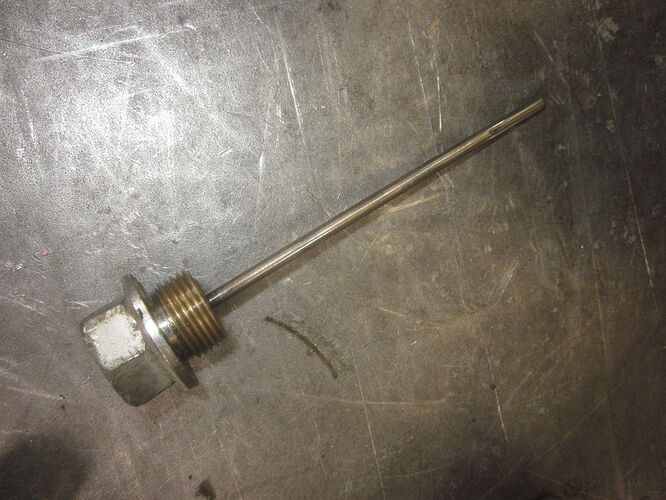 I will also try to find a way to seal the leak in the existing plug/dipstick, as I think it is an original part.

Good luck! The replacement ones generally aren’t identical to the originals - if I recall correctly, I had to slightly ‘roughen’ the surface of the ‘dipstick’ on my replacement to better allow the oil to ‘stick’ and the level then to be read. Level for new stick taken at a (measured) oil change - not all dipsticks are equal (o;