Hi all
I am slowly resuscitating a rather neglected V50 II, on which all the brakes were seized. I have rebuilt the calipers and fitted a new (genuine) piston and seals to the master cylinder for the linked brakes, but have hit a problem when trying to bleed the system. I tried to suck fluid through using a large syringe, but seemed to be just pulling against a vacuum, and no fluid emerged from the caliper bleed nipple. I then tried using pressure (an old gunsons system with a modified reservoir cap). That did not result in any fluid emerging from the nipple, although plenty leaked from other places.
I then dismantled the master cylinder again and checked that the inlet port was clear (it was). However, when I refit the piston assembly I cannot blow air throught the fluid inlet (or backwards throught the outlet port. It seems like the piston is too far forward and the front seal is blocking the inlet port.
I have compared the new piston to the old one and it seems to be the same, and I assume that it did work before.
The axial position is determined by a shoulder against which a washer and retaining ring are pressed, and I can’t see how this can have changed.
A bit stumped!
Has anyone else faced this problem? Can anyone suggest anything I am doing wrong in assembling the master cylinder?
Thanks
Marcus

One of the washers which keep piston in place is not flat, and fitting it wrong way results in piston misaligned against those tiny holes. Try this…

Hi, thanks for your reply. I noticed that the washer was slightly dished. I assumed that this might have happened when I removed the piston with a punch. In any case, I did fit it so that the dish would leave the piston as far back as possible. I can fit it the other way round, but I would expect that if anything to make it worse. Definitely worth a try, though!

It’s slightly counterintuitive what happens there, so being you, I would try. I did, and it solved my problem:)

Interesting thought.
I am currently having exactly the same problem with the linked master cylinder on my Cali 3. It wouldn’t bleed as it was blowing when I depressed the pedal, but sucking back as soon as I released it. I dont think it is how the little ring is seated as I had exactly the same problem before I fitted the new seal kit and the actuating lever has just the right clearance. Last night, I removed the master cylinder and reservoir and blew air back into the chamber from where the outlet pipe usually connects. This seemed to dislodge some muck and gunge. There should be 2 holes, one large and one small in the bottom of the reservoir. I could only see one in mine, but the Cali 3 is different from my Spada as there are 2 bolts in the bottom of the reservoir, undo these and you can remove it.
Currently awaiting brake fluid delivery so I can try it out again.
My suggestion is make sure those holes are clear and it should work.

My suggestion is make sure those holes are clear and it should work.

This is the whole idea, see the pic, this is single-caliper master(not-linked), but everything’s similar. Piston, two seals on it. As you see through those two tiny holes, one of the seals crosses the holes on its way there-back. With washer fitted wrong way, the piston can’t withdraw as far as it is needed to suck another portion of fluid. I may be not precise , but I am not far from truth, just forgot the details. 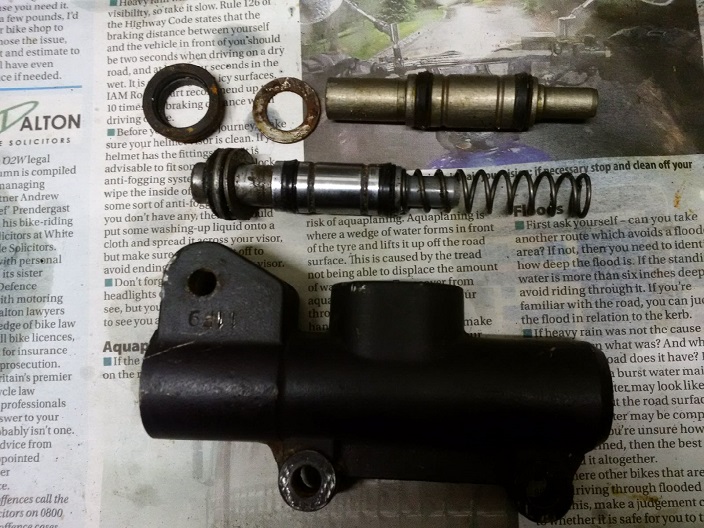 Thanks for your replies. I have carefully compared the old and new position, and measured things. I looked down the cylinder with an endoscope but can only see one hole, which is well behind the front piston seal. I think that the other hole is blocked and I cannot see it. If I can remove the plastic elbow that feeds the fluid into the cylinder, hopefully I can see the second hole and clear it. I couldn’t easily remove the elbow. Do I just just lever it out?

I couldn’t easily remove the elbow. Do I just just lever it out?

Yes, you need to use some force, as rubber is tight fit. Bit of hot water would help, or hairdryer maybe. Both holes are next to each other, and one of them is truly tiny!

I used a foot pump with a small adapter nozzle in the end to blow back up the outlet and covering the larger hole with my finger.

Managed to get the plastic elbow out without breaking it

Cleared the totally blocked tiny hole. Now I ‘only’ have to bleed the system!
Thanks for the helpful advice .

Great result. I’ve recently bought a vacuum bleed kit, £12.50 of ebay, brand new. It looks like it should make an easy job of it.