Hi all, I’m a new member living in the Stansted Airport area. I’m new to Guzzis but old (very) when it comes to Velocettes. Anyway, I recently became the proud(-ish) owner of what In think may be a V7 700. When i bought, I was informed that it was a 1973 model originally used somewhere in Europe and brought into the UK in 1995. However, the VIN number is VS69EV, would this mean it could be a 1969 model? Its in full working order, except the odometer. It rides very well and seems to perform nicely to someone who has no idea what to expect from one of these. It has what I understand is called a “loop” frame. Anybody who knows what this well patinated machine actually is is cordially invited to let me know

When the Covid situation is under some control it would be good to attend a few meetings or gatherings and make contact with fellow members. I would also like to hear from any members who have had experience or even owns one of these (see photos below, possibly) and would care to offer any advice or let me know what a pile of old poo/marvellous rare and historical vehicle (delete as appropriate) I have lurking in the garage. 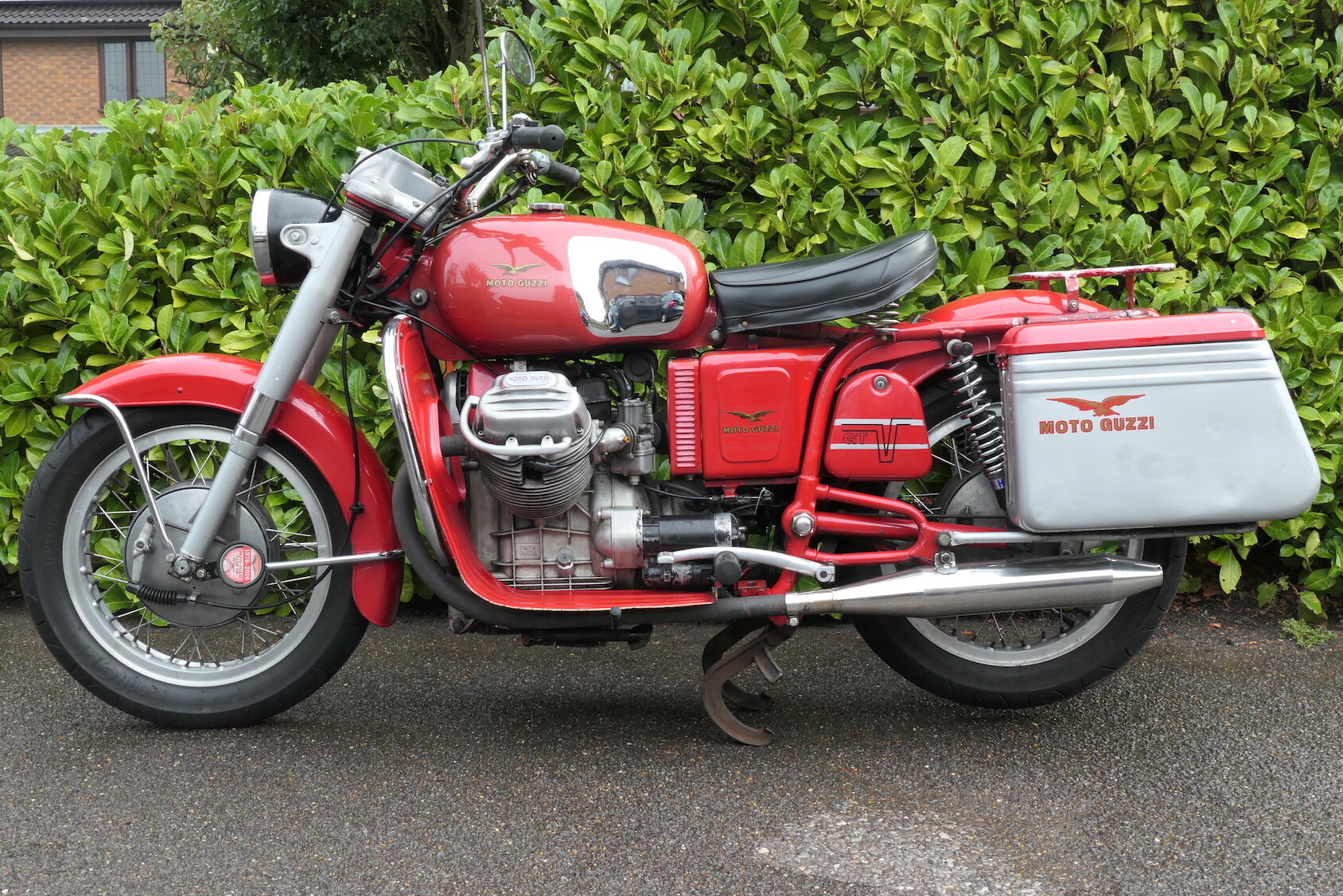 Wow - nice bike. I’m pretty sure I saw that listed out there somewhere, looks kind of familiar.

I think I’m the only other Essex Branch Loop frame owner. Mine is a '72 Eldorado which is an 850 5 speed model. Actually marked up as a '73 on my V5 document. I’ve owned it around 4 years now. I think you should have a VIN plate on the head stock that will have a date on it, mine has.

I’m actually very nearly on the same road as Stansted, I’m in Braintree - on the road just off the roundabout at Cholesterol Corner.

I’d guess that if you are used to Velocettes and other of that awful old British stuff then the V7 will offer very few challenges to you mechanically. They are a good solid, well engineered and reliable piece of kit (though normal rules apply as with any old timer).

I suspect we will be cancelling branch meetings for the rest of this year now with the new lock down rules in force, though I’d be happy to catch up with you if you are in the area - normal distancing rules being applied naturally.

That bike was on another forum.
It would need someone with a bit of knowledge to look at it properly, but with my limited experience I can see it has a few mismatched bits e.g.
Early-type sidepanels which leave the air cleaner exposed.
GT stickers would only have been used on 850GT only, positioned on sidepanels rather than toolboxes.

Not necessarily a problem as plenty of people mix-and-match bits.

I have a 1972 850GT and am sometimes in Essex as my aged parents live in Harwich.

That’s a real beauty you have there Mr Teebee. I can’t wait to see it at a branch meeting although, as Steve says, that could be a long time given the situation.

… could be a long time given the situation.

Thanks to all who responded to my (much) earlier post. Good to hear from you and apologies (no excuses) for not replying sooner.

It turns out my bike is, as recently confirmed by Piaggio is a V7 700 manufactured in 1973 for the Italian police in Rome. The original colour, as confirmed by the inside of the battery covers and other bits, is similar to an RAF blue. It was first registered in the UK in November 1995 and apart from the rather poor paint job appears to be largely original apart from removal of the police equipment it would have been kitted out with. It starts, runs and rides OK, or at least it seems that way to me although there is rather more vibration that I had expected. Its nothing like as bad as the British vertical twins I’ve experienced and isn’t uncomfortable at any speed up to normal motorway speeds.

The main problem was with the front brake (single sided 2LS type) which was so weak it wouldn’t even hold the bike still on the very slight slope downwards away from my garage door. Fortunately the rear brake is quite good but after a few short rides, I took it off the road until I could get the braking sorted out. Thanks to the gentlemen at Friction Services near Bristol, We may have resolved the issues as the brake certainly seems much stronger but it hasn’t been properly road tested yet. I have been trying to tidy up a few details on the bike such as the big heavy battery only being held in place by a clapped out and perished bungee strap. The original fixings had long gone as the holes in the battery support plate had rusted away. but Ive made up a fairly crude replacement and modified the support plate to suit.

Before I road test the old boy again, I want to carry out a lube service and would appreciate advice from anyone out there who runs a similar model as to what oils they use for the engine, gearbox and rear drive. Also, the bike is shod with Conti GO tyres which are relatively recent and appear to be in very good condition. I’m not sure what pressures to run these at. Currently there at 21 psi (front) and 26psi (rear). The ride quality and steering seem to be OK at these pressures but if they’re wrong, please, please advise.

So, Here’s hoping you all had a good Christmas and the New Year works out well for you and you stay clear of the CoVid curse. And, here’s hoping this rotten weather improves soon so riding can become a pleasure again and not an endurance test.

Your tyre pressures are as per the manual, but I run mine a little bit higher than that. About 30psi front, 32 psi rear. Modern tyres seem to be better with a bit more air, but these bikes are pretty tolerant. You’ll scrape the stand on the deck before the tyres give up.
The front brake is very critical on lining material and setting-up. Mine is the 4LS so setting-up is a bit more complicated but once it’s done it’s perfectly adequate with the Friction Services linings. It seems to be need a little adjustment every 1000-1500 miles to keep it on top form.
Do you have a balance pipe in your exhaust system? Should be across between the 2 silencers, just forward of the rear wheel. That helps with smoothness, as does getting your carbs properly synchronised. And don’t lug the motor too much - they like a few revs. I have the 5-speed box and it’s lovely and smooth at 80mph/4000rpm.
I use Silkolene Comp 4 20W-50 engine oil and bog-standard 90 gear oil with a dash of molyslip or similar in the gearbox and rear drive box. If you have the bigger rear drive box with removable sump, some of these have the level plug too low due to a manufacturing defect. Ignore the level plug and put a measured 360cc in. Drop the engine sump every second oil change and clean it out. There is no filter!
Ian

Coincidentally this subject also came up on the BSA Bantam forum. The bottom line is, tyres of yesteryear were different, had stiffer sidewalls so typical pressures were low compared to modern standards. What Ranton said, ignore the original user instructions, moderrn tyres need higher pressures, typically examples in the high 20’s to low to mid 30’s range. But in any case you need to experiment, it all changes according to make, type, weather (cold or hot), riding style (how much do you heat the tyres up when riding), rider’s weight, luggage or not, pillion or not, and so on and so on and so on.

Thanks for the info gentlemen. Sadly, I don’t have an owners, nor a workshop manual for the old V7 700. Although built in 1973 I think (other opinions may be available) that it was little changed form the original version introduced in 1960-something and may, therefore, be somewhat different in detail to the civilian models produced in "73. There’s no balance pipe between the exhausts on mine.

If anyone has an idea where (if) I can get hold of operating or workshop manuals please let me know. Otherwise, I will be taking your advice regarding lubricants and tyre pressures.

Once again, many thanks

You should be able to find a manual on Greg Bender’s “This Old Tractor” site - https://www.thisoldtractor.com/moto_guzzi_loopframe_workshop_manuals___shop_manuals___service_manuals.html

I looked at your silencers in the photo again - possibly Keihan replacements. Someone I know has those, and they sound quite “sporty” but have no balance pipe stubs. It’s still worth synchronising the carbs though.

Always worth synchronising the carbs!

Thanks again guys. As recommended by Ranton_Rambler (thanks Ranton) Ive just had a look at the This Old Tractor website and…well, what a lot.

Dunno whether the silencers are Keihan or not but to me they sound very mellow. Synchronising carburettors eh?. Never owned a twin before my 2019 RE Interceptor and that’s fuel injected so I wouldn’t have a clue. Guess I’ll find something in the “Tractor” website. Hopefully. Maybe.

I think on those bikes there is no tapping on the inlet elbows for screwing in vacuum gauges. A PO has drilled and tapped mine. Without those I suppose you’ll be sticking your fingers down the throats to feel the slides moving.

I’m only down the road in Braintree if you ever want to drop by to compare notes or stick it up on the table here. 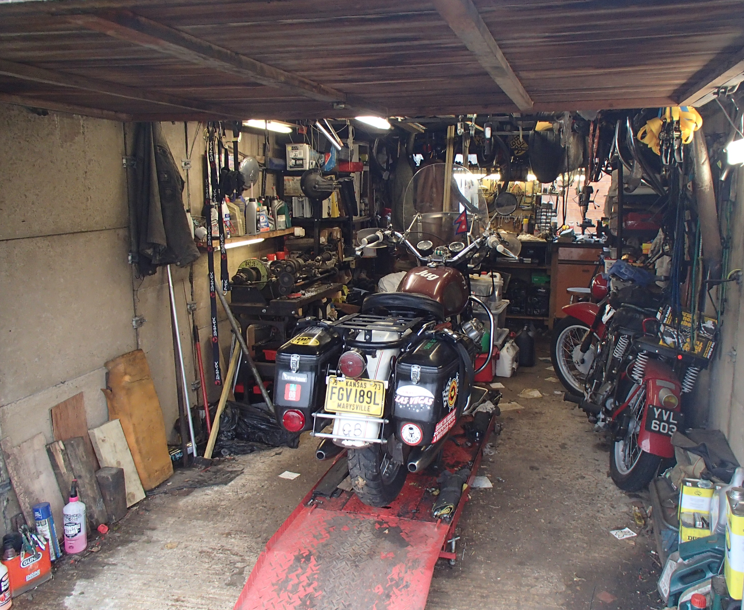 Rather than fingers, try using old individual feeler gauges, one under each slide and you can then see them move as the throttle slide lifts.