It’s a great bike, especially now that I’ve got a Beetle Map to match the aftermarket silencers. I think the Mk II seems to be a real improvement on the Classic in a number of ways, and I’m really pleased I traded up.

However, the one concern I do have is the whining sound I get from the gearbox/transmission - quite noticible in all gears. I know its from the gearbox rather than the final shaft drive because the sound drops in pitch when changing up. It also disappears if I engage the clutch to coast down, but remains if I let the engine do some braking.

Any ideas? Could it simply be low a oil level in the gearbox? Could it be something serious that might cost loads to fix?

The bike has done about 8500 miles and has a good service history. However I bought it from a non-Guzzi dealer.

Thanks for any suggestions.

First thing to check would be the oil level. If it’s ok it may not be the “right” oil if it’s been serviced by a non Guzzi dealer so you could consider changing it for what you know is the right oil. If it’s still noisy it could be a case of “they all sound like that sir” or you do have a problem.

I checked the oil levels this morning, having warmed up the engine:

The engine oil level was near the top of flat range of the dip stick and was a nice clear brown colour.

The transmission/universal joint oil level at the back wheel was nicely at the level of the plug with the bike on level ground. The oil colour also looked good - perhaps darker, but clear.

I then looked at the gearbox. According to the owner’s and service manuals there’s no instruction on how to tell if the gearbox oil level is right. So I simply tried using the engine dipstick in the open gearbox oil filler plug. Pushed it in as far as I could before it came to a stop due to hitting something inside, and when I checked there was virtually no oil on the stick.

Hmm, of course I have no idea at the moment whether that is right or not. I will get hold of some 75W-90 oil and try draining/refilling to see if it makes any difference.

In the meantime, has anyone else got any suggestions as to how to check the gearbox oil level?

Try shoving a long cable tie in there

Yeah, that’s what I was going to do, if there were no other suggestions to check the level.

I got to check and change the gearbox oil today… I found a number of issues…!

Firstly, the drain plug was actually loose! Thankfully it would seem that little oil had been lost but I have no idea how long it had been like that as i only got the bike about 4 weeks ago.

Secondly, on draining the oil I found that it was about 500ml but it was quite black and smelt quite bad - not as bad as a bad egg smell but not nice.

Thirdly, when I poured the oil into an old petrol container I use for recycling the oil, I found gritty lumps in the residue - almost ceramic in texture and light brown in colour…

Anyway, filled up with nice new clear and clean oil, and the gearbox/transmission still whines, so that answers that question!

However, has anyone any comments on the state of the old oil, or the presence of the grit? Here are some photos: 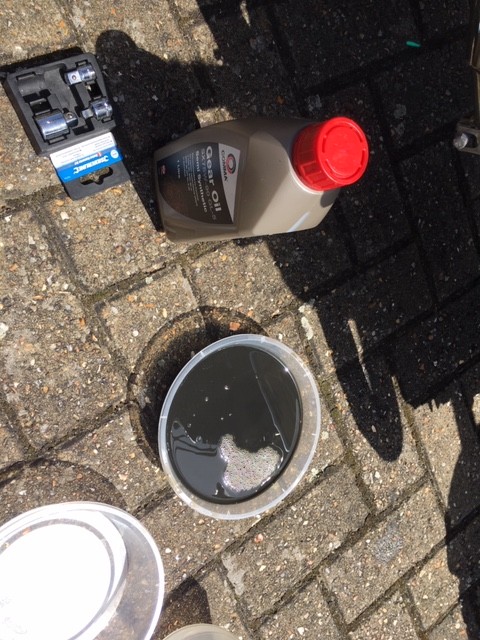 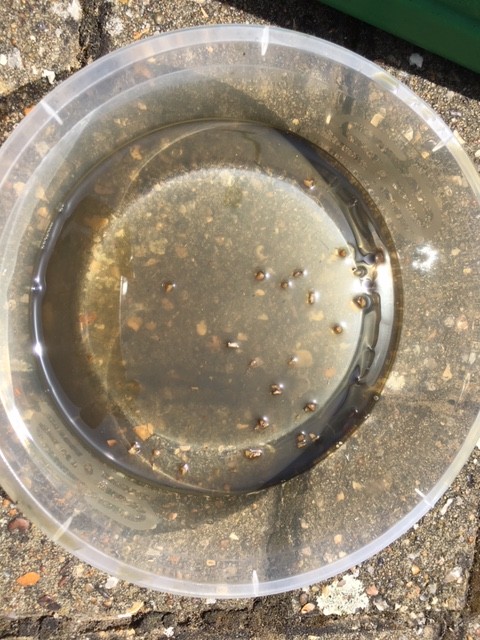 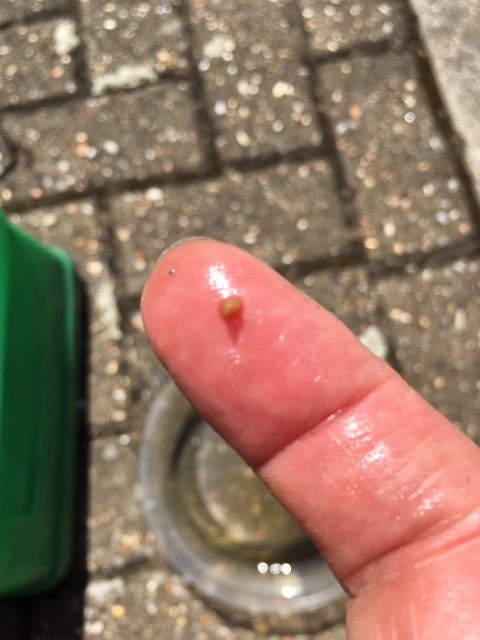 Shouldn’t be any bits of any sort. Doesn’t look good. Maybe it’s never had a gearbox oil change all its life.

Are the bits attracted to a magnet?

No they’re not. They do seem to be ceramic rather than metallic.

Not sure how that would get in there. Can you crush the particles? If not probably plastic or nylon. Still shouldn’t be in there…

Yeah, definitely shouldn’t be there! They can’t be crushed, but as I say, the feel more like a ceramic then anything else.

Anyway, most, if not all of them hopefully came out when I changed the oil.

I have looked at the gearbox parts drawings on the fowlers website, and I’m wondering if these bits that I photographed (shown in the previous post above) found in the gearbox oil could be from any of the bushes/spacers/rings that separate the gears on the primary or secondary shaft?

Could any of these be made on plastic/nylon/ceramic and damage to them be causing the whining noise from the gearbox when under load - i.e. driving the back wheel.

My assumption is that the whine is coming from the primary gear shaft that is coupled to the engine rather than the secondary shaft which I assume is coupled to the shaft drive to the back wheel, as the pitch of the whine is directly related to engine speed rather than rear wheel speed. i.e. the pitch goes up and down with engine speed as you change gear, not just with the speed of the back wheel.

I considered whether the whine be coming from the clutch? But I doubt it as I have seen other posts to this forum where the clutch was suspected but turned out not to be the source.

I’m taking the bike in for warranty work on Monday week - an oil leak from the shaft drive bevel box - and I’m going to suggest that they look at the gearbox as well.

Whilst the bike is in having the oil leak fixed under warranty, I’ve asked them to investigate the gearbox/transmission whine.

I showed them the strange deposits that I got out of the gearbox when changing the oil - they suggested it was “crystalised oil”. Does that make sense to anyone?

Never heard of that before. Can the bits be assembled into some sort of shape, e.g. a ring?

Never heard of that before. Can the bits be assembled into some sort of shape, e.g. a ring?

No there’s not enough bits to make sense of an overall shape.

I did look up crystalised oil on the internet, and there are references to gear/engine oil crystalising into solids at low temperatures - not sure just how “low” the temp has to go, though!

Hi Jim, allow me to put your mind at rest…
Firstly, it is true: “They all do that”. My 2015 V7 II whined like mad when new, it’s quietened down a bit with use but still noticable (quite a nice sound actually with ear plugss in).

Secondly, the gearbox oil level can’t be checked - you have to drain then refill with 500ml. I use 550ml just to be sure and to counteract any slight leaks. The factory fill on my bike was black, not sure why because they claim no additives should be used.
Make sure to use FULLY SYNTHETIC gear oil! Best to use the approved Rotra oil since it has a higher spec than other manufacturers equivalents (I’ve checked the datasheet).

Thirdly, I found strange orange/brown bits in the gauze strainer when I first changed the oil. Nothing’s appeared since, from memory they seemed like bits of sealant.

Fourthly, the gearbox oil is supposed to last for years/many thousands of miles, but given the tiny amount in there it’s worth changing every couple of years. It’s a chance to check the filter for any bits too.

Thanks for the reassurance Pete!

ould they then be hadened sealant rather than ceramic? If so that would make a lot more sense and less of a worry for you?